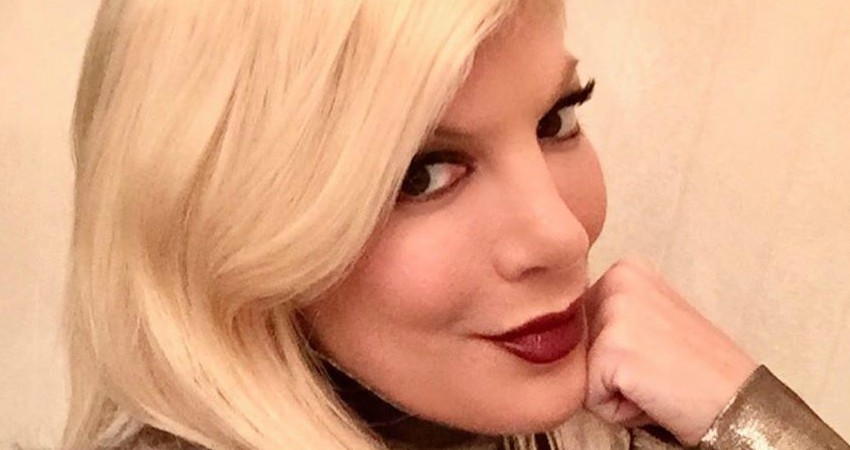 Beverly Hills 90210 actress Tori Spelling has been trying to join The Real Housewives of Beverly Hills for years. While doing promo interviews for BH90210, Tori revealed that co-star and BFF, Jennie Garth, was approached to join the cast.

Denise Richards guest-starred on the BH90210 reboot over the summer. She also joined the cast of RHOBH at the start of Season 9. However, it looks like Tori doesn’t have an ‘in’ for convincing Bravo to add her as another Housewife.

Report: BH9010 Alum is ‘Begging’ Andy Cohen to Let Her on the Show

A source told RadarOnline.com that Tori desperately wants to join The Real Housewives of Beverly Hills to help compensate for losing her job after 90210 was cancelled after one season.

The contract she signed with the show was for 2 seasons, but a clause for poor ratings.

“Fox told the cast they were guaranteed two seasons, but in the fine print there was an out clause that included a low threshold for ratings. She’s also looking at doing more reality TV because her career is over with scripted TV.”

Tori is no stranger to reality TV. She headlined her own reality show, True Tori, 2014. Her husband, actor Dean McDermott, also starred in Tori & Dean: Cabin Fever. Dean doesn’t seem to take on many acting roles, leaving Tori the sole provider for their five children.

Money woes is rumored to be the reason why Tori is trying so hard to join RHOBH. The couple have been sued multiple times for credit card debt. They also owe millions in state and federal taxes. However, they still live a lavish lifestyle as neighbors of Kim Kardashian.

Is Tori too broke for Beverly Hills?

The former child star was reportedly paid $70,000 per episode of BH90210, plus $15,000 for co-creating credit. Growing up as the daughter of a rich and famous television producer, Aaron Spelling, Tori is clearly accustomed to a certain lifestyle.

TV Shows Ace reports that Tori pays $13,000 a month in the same area where Kim Kardashian lives. Kim was even offered a part on the BH90210 reboot but ultimately turned the role down. Living outside of her means is part of the reason why Tori is so desperate for income. However, that desperation may be what prevents the network to risk bringing her into the RHOBH fold.

“She is freaking out because the 90210 show was her moneymaker. She thinks now is the time … Except she is delusional because she doesn’t have enough money to be a Housewife!”

Tori isn’t doing too bad in life, though. She recently shared a sizzling hot bikini photo on Instagram. The star was on a family vacation in Mexico.

This was the view from our balcony! Well… one is my view and the other is my hubby’s 😂 Loved our family time and relaxation at @dreamsresorts #dreamsplayamujeres So incredible to find a resort that is so incredibly in touch with what the adults want and need as well as kiddos of all ages. 📸: @imdeanmcdermott #unplugged #familytime #familygetaway #viewfordays

One star of The Real Housewives of Beverly Hills who did tape for the upcoming Season 10 is alum Brandi Glanville. The former model left the show after Season 5. However, she’s come back several times since in a limited role.

Reality Blurb reports that Brandi recently spilled a drop of tea about the drama fans can expect to see on-screen next year. Brandi didn’t name names, but she teased that one of her co-stars is refusing to film.

“I don’t know if we’re going to ever see one of the housewives ever again. She’s kind of refusing to film and it’s intense.”

Whether she’s referring to Denise Richards’ busy work schedule or Kyle Richards’ anxiety remains to be seen. Perhaps she is talking about another Housewife entirely.

Bravo has yet to announce a 2020 premiere date for Season 10 of The Real Housewives of Beverly Hills.