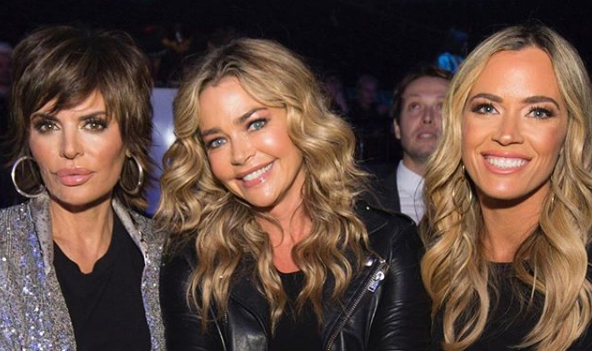 Denise Richards has reportedly been missing from filming RHOBH.

According to Hollywood Life, due to several TV movies and The Bold and the Beautiful, she stays too busy. A household name since her role in the cult classic, Wild Things, Denise has always been busy. With scripted acting occupying her life for thirty years, it is difficult for her to make the switch to all that comes with reality television.

A source close to the soap opera actress said she loves doing Housewives, but her priority has to be acting. Being on the reality show has opened more doors. Denise is busier than ever and not one to say no to any project.

Patiently waiting for my date to be ready…. @aaronwilliamcameron hair: @laurarugetti make up @anaisartistry #saturdaynight

Denise Richards Is One Busy Housewife

The article says shooting for her role as troublemaker Shauna Fulton on The Bold and the Beautiful is really intense. Soap opera schedules are long because they need so much content. In addition to filming the soap opera she also has a science fiction series FraXtur and some television movies lined up as well.

The source said sometimes she’s so busy she gets her projects mixed up. They said not only does she have to do all the acting, but she is a busy mom. Denise has always been a hard worker claiming early on she took projects because she had to. Her divorce from Charlie Sheen took all her money and resources. She felt like she was starting over.

According to Hollywood Life, Denise Richards often treats the reality show like she’s on a set. They have to keep reminding her it’s real and they are at her home. She’s used to filming in a studio and it’s probably hard to turn that off. She’s missed events and not hardly filmed for RHOBH at all. The source said, “the RHOBH women love her and are hopeful she’ll be at more events in the [near] future.”

Denise Richards is focusing on her family too when she’s not working. Richards has Sam and Lola with Charlie Sheen who are both in their teens as well as an adopted daughter Eloise Joni. She also is a fairly new wife to actor Aaron Phypers.

The source told the media outlet, “Denise has also really been trying to focus on her family and her health, even recently recovering from a surgical procedure.” Fans hope they’ll get to see some behind the scenes of her busy schedule on RHOBH when it returns.