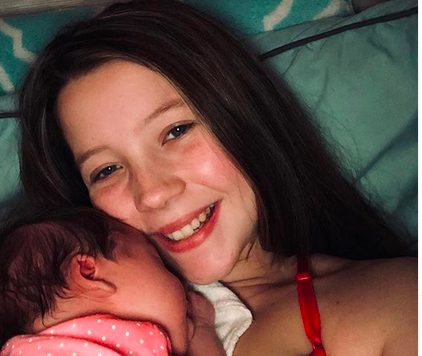 TLC‘s Unexpected follows young mothers as they navigate parenthood. One of the moms on the show is Hailey Tomlinson. This is Hailey 1, who is the original Hailey on the show. Hailey is the mother of Kinsley.

On social media Monday, Hailey revealed that her baby girl is eight months old. She shared a new picture of the little girl. She is wearing a cute pink bow on her head and giving Hailey a big smile. Fans are absolutely loving this picture of the baby. They are amazed at how quickly time has gone by.

Another recent post from Hailey was also a hit. She shared a side-by-side picture of both herself and Kinsley as babies. Unexpected fans freaked out over how alike the two of them look.

Whenever Hailey shares an update about Kinsley, especially when she includes a cute picture, fans go crazy. They love seeing updates of the adorable baby girl. They look forward to seeing the latest updates about Hailey 1 and Kinsley.

On Mother’s Day this year, Hailey wrote about her experience as a mother. The young mother said, “When I first found out I was pregnant at 15 I was scared that I couldn’t do it and I got sooo much hate but being a mother is the best thing in the world and I wouldn’t want it any other way. I’ll play both roles as her mom and dad. It’s tough but I know I can do it. Being a teen mom, living under my moms roof is hard but I will do anything I can to make sure my daughter has everything she needs. I will go to college and be successful. I’m doing this for her. She gives me a reason to still be here and is my motivation. I love her more than anything in this world❤️“.

Unexpected fans will recall that Hailey 1’s baby daddy, Matthew, left Hailey for another girl named Hailey. The second Hailey was actually friends with Hailey 1 prior to the drama.

Well, now it turns out that Hailey 2 and Matthew are expecting a baby. They revealed this on the Unexpected tell-all. Immediately, they got a lot of backlash from fans of the TLC show. Shortly after the tell-all, they announced that the baby is a boy.

Fans feel that this has to be hard on Hailey 1. Matthew seems to be very present for Hailey 2 but ditched Hailey 1, leaving her to be a single mom. Unexpected fans predict that he won’t stick around long for Hailey 2’s son either.

No matter what, it seems that Hailey 1 is doing a great job of raising Kinsley on her own. Fans think she’s much better off without Matthew.

What do you think of the sweet picture that Hailey 1 shared? Leave a comment below!