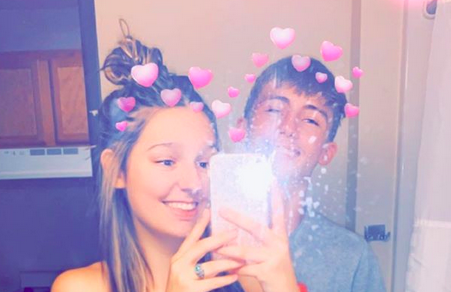 On Sunday night’s Unexpected tell-all, Hailey 2 and Matthew Blevins revealed they’re expecting a baby. This was during part two of the tell-all. Part one aired a week prior.

TV Shows Ace reported earlier this month and said, “Unexpected fans thought maybe Hailey 2 and Matthew expected a baby. But, she never shared recent photos of her abdomen. However, this weekend she shared a photo of her and Matthew dressed for a friend’s wedding, and it sure looks like she sports a baby bump.”

Hailey 2 definitely isn’t a fan favorite. It has gotten to the point where the teenager has received death threats via social media. She turns off the comment feature on many of her Instagram posts for this reason too. Lots of Unexpected fans have hateful things to say about her.

After the tell-all aired on Sunday evening, both Matthew and Hailey 2 shared posts on social media about the baby news.

In addition, they went Live on Instagram to talk about the pregnancy. During the Live, the couple shared that they are expecting a baby boy. Originally, they planned to wait to announce the baby’s gender until they had a gender reveal party.

So far, fans aren’t impressed with how Matthew is as a dad. Just recently, Kinsley was hospitalized. Text messages between himself and Hailey 1 were released. From the looks of it, these texts got nasty. Later, on his Instagram story, Matthew said that he did go to the hospital.

Fans are wondering how Matthew will continue to care for Kinsley and this new baby on the way. Fans are worried that he will stop caring about Kinsley and focus solely on Hailey 2 and their baby. Several fans noticed that he has “daddy to be” in his Instagram bio. This is odd considering he is already a dad to Kinsley. Fans take this as another sign that he is more focused on Hailey 2 and might neglect Hailey 1 and Kinsley.

After Matthew and Hailey 2 revealed that they are expecting a baby, fans assumed it had something to do with being on the show. Though Hailey 2 said it was not planned, fans are unsure. To help their case, Matthew recently confirmed that he and Hailey 2 will not be returning to Unexpected. Still, fans are concerned about Hailey 2’s intentions with this pregnancy.

What do you think of the big news from Hailey 2 and Matthew? Were you expecting it? Share your thoughts in the comments below.

For more Unexpected news, stay up to date with TV Shows Ace.