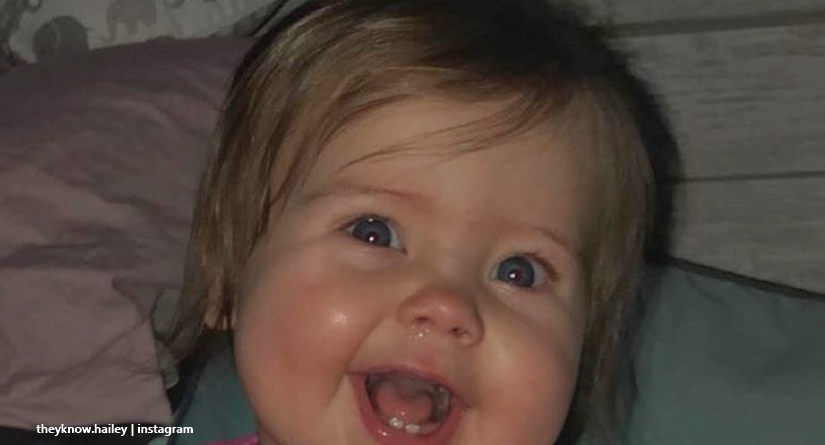 Unexpected on TLC ended the season with the announcement that Hailey 2 was pregnant. Fans felt so sorry for Hailey 1. Obviously, with her ex BFF pregnant, the chances of Matthew taking more interest in his daughter Kinsley seemed remote. But, fans find it hard to understand his lack of interest. After all, Kinley’s gorgeous and fans went gaga over the baby on Thanksgiving weekend.

On Sunday night, Hailey 1 shared a photo of Kinsley and the little 8-month-old looks the spitting image of her mom. She captioned it with, “My daughter is so beautiful.” But, she put an unhappy face emoji on it. So, maybe she expresses her sadness as Matthew seemingly shows little interest in his daughter. Unexpected fans seemed relieved to see her as they heard that recently, little Kinsley wasn’t very well. But, one thing they all agreed on, is that Matthew’s baby is a real beauty.

One fan noted, “I’m so glad she looks like you and not Matthew. I know that’s rude but you two girls are gorgeous!” Another person also liked that Matthew didn’t seem to leave his features on the baby. Fans grew very angry with Matthew and the way he treated his girlfriend and baby. But mostly, fans just loved the little “mini-me.”

TV Shows Ace reported that Matthew and his new girl, Hailey 2 broke up after she fell pregnant. Then she hinted they may be back together. So, nobody’s sure of their relationship status right now. And, if they really broke up, that could mean no place for Hailey 1 on another season of the show, Starcasm suggested.  But, fans know for sure that Hailey 1 and Matthew show little signs of getting back together. And, they feel that at least Hailey 1 got the best baby ever. One fan said, “She is super cute!! Always happy!!” Another noted, “She’s so adorable! 💗 She looks like a little doll .”

Other fans also went on about the little Unexpected beauty. One adoring fan wrote, “she is adorable such a beautiful baby! looks just like her mama.” Another posted up, “She’s the most gorgeous baby I’ve seen!!!!” Meanwhile, others gushed about those cute little cheeks that look so pinchable. But, almost everyone agreed the little girl’s the prettiest little “mini-me” on the show. Really, it’s no big surprise that fans can’t understand Matthew. On Twitter, he still gets a lot of hate even since the Tell All.

My daughter is so beautiful 🥺

What do you think of the cute picture that Hailey 1 shared of baby Kinsley? Do you think she’s the cutest little baby and her mom’s mini-me? Sound off your thoughts in the comments below.

Netflix Reveals If It Will Save ‘Manifest’ From Cancelation
‘Deadliest Catch’ Exclusive: Harley Davidson Helps the F/V Cornelia Marie Out Of A Jam
‘General Hospital’ Spoilers Hint At Kelly Monaco’s Departure As Sam
Janelle Brown Panics As Wildfire Heads For Their Homes
Sister Wives Star Mykelti Returns To Her Original Roots