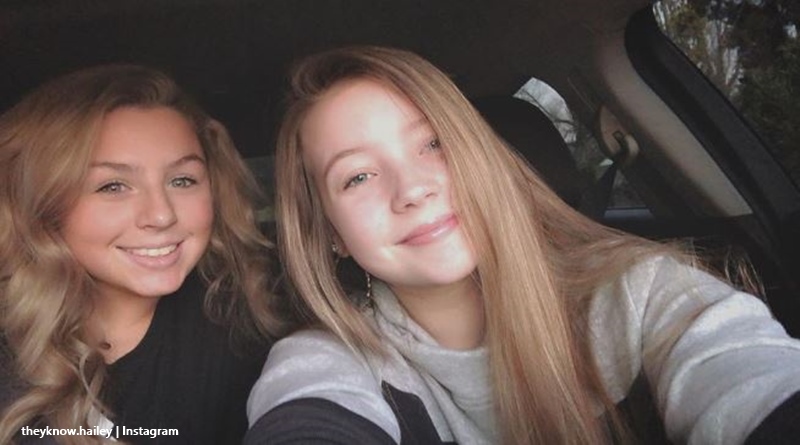 Unexpected on TLC premiered the latest season in July this year. Fans met Hailey 1, who got that name after her best friend, also Hailey, made off with baby daddy Matthew. Just 16 years old at the time the show started, the two young parents produced cute baby Kinsley. Now, fans asked for a comparison photo of Hailey 1 and her baby girl and fans can’t get over Kinsley twinning with her mom.

TV Shows Ace reported that Matthew made off with Hailey 2. Subsequently, she announced that she’s also pregnant. The young people, rumored as split these days, expect Matthew’s second child in 2020. Although Matthew apparently has little to do with his first baby, Kinsley, Hailey 1 reveals her daughter’s so beautiful. In fact, in a recent Instagram post, fans went “gaga” over the charming little girl.

On that post, Unexpected fans raved about how pretty Kinsley is. One fan noted what a lot of others felt. They wrote, “She’s so adorable! 💗 She looks like a little doll .” And, yes, the little cutie-pie really does look like a cuddly little doll. Now, Hailey 1 is not an ugly girl either. In fact, she’s very attractive, and like her daughter, she also has big eyes and a lovely smile. One has to wonder what went on inside Matthew’s head when he left her for her ex-bestie.

TLC noted in their introduction of Hailey 1 and Matthew that both of them are so young. And, even though Kinsley’s growing up now, Hailey 1 still looks very much a youngster herself. Growing up quickly as a mom, she seems like a very good mother and acts quite maturely for age. And, in a photo showing her as a baby, she looked really pretty. Viewers can definitely see the likeness between baby Hailey 1 and grownup Hailey. Now, she shared comparison photos for fans.

Taking to her Instagram on Saturday, Hailey shared the photo and captioned it with, “People keep telling me to post a side by side of me and Kinsley so here it is.” Well, nearly 20k Unexpected fans liked the photo and lots of them commented on the likeness. One follower noted, “😂😂 copy paste. U 2 could pass as twins.” Another said, “you really gave birth to yourself 🥺.” Yet another posted, “Wow! No denying who her mama Is.”

What do you think of the comparison photo that Hailey 1 shared showing her and Kinsley? Do you think their twinning’s amazing? If Hailey 1 hadn’t written which was which baby, would you be able to tell the difference? Sound off your thoughts in the comments below.