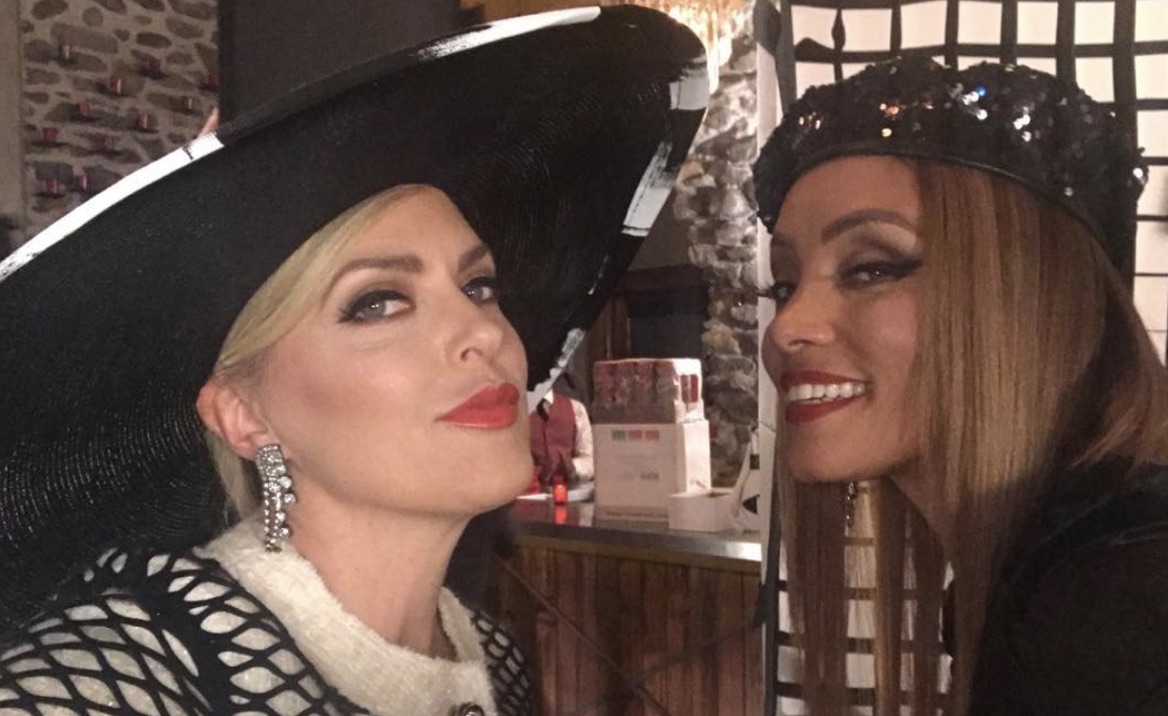 Thanks to Michael Michele, Dynasty fans previously discovered that Elaine Hendrix will be the new Alexis Carrington. Nearly two weeks ago, TV Shows Ace revealed that Michael accidentally revealed the secret in a bts video that she posted on her social media. Elaine Hendrix’s name was on one of the cast chairs.

Fans of The Parent Trap certainly know Elaine Hendrix from her role as the evil step-mom to be, Meredith. Dynasty fans may not realize that Elizabeth Gillies and Elaine Hendrix starred together on the FX comedy, Sex, Drugs & Rock & Roll. Gillies played Denis Leary’s daughter Gigi, and Hendrix played Ava Delany.

Elizabeth Gillies was clearly ecstatic that Elaine is co-starring with her. She went to Instagram to share her exuberance.

“Words can’t express how excited I am about our new Alexis! So thrilled to be back on set with @elaine4animals. Can’t think of anyone better to fill this role. We’re getting the band back together, Elaine!”

Words can’t express how excited I am about our new Alexis! So thrilled to be back on set with @elaine4animals. Can’t think of anyone better to fill this role. We’re getting the band back together, Elaine! ✨

Elaine Hendrix is thrilled to play the diabolical Alexis Carrington. She posted a lengthy Instagram message to share her excitement and honor at playing this iconic role. She shared a long list of franchise roles she has played.

“I’ve played my fair share of characters in legendary Hollywood franchises: Get Smart • Munsters • SNL • Inspector Gadget • Disney’s Air Buddies, Beverly Hills Chihuahua and of course, The Parent Trap. I’m super excited to finally share that my latest project is right up there with the most iconic of the iconic – I’m honored to be playing the new ALEXIS CARRINGTON on The CW’s DYNASTY.”

She also thanked many, many people, starting with Elizabeth Gillies. Any Dynasty fan that was not sure if Elaine is the right person to play Alexis should feel assured that this is the person that Liz Gillies wants to play her mum. She is gorgeous, elegant, funny and can play the most evil person in the room. She is perfect.

Right now, we do not know when Alexis will appear on the show. What we do know is that she has a new man, a new look and according to TV Line, “scores to settle.” Sounds like Adam had better watch out!

I’ve played my fair share of characters in legendary Hollywood franchises: Get Smart • Munsters • SNL • Inspector Gadget • Disney’s Air Buddies, Beverly Hills Chihuahua and of course, The Parent Trap. I’m super excited to finally share that my latest project is right up there with the most iconic of the iconic – I’m honored to be playing the new ALEXIS CARRINGTON on The CW’s DYNASTY. And there is an endless list of people to thank, but I have to mention some of my faves: @lizgillz @justslogan @davidrosesept26 @kelmariejones @innovativeartists @deadlinedominic @deadline @kyledean @mckeonmyones_ent @denisleary @thecw @lisaannwalter @gilesforeman @respectfulleigh @chris.sergi THE CAST & CREW and so many more! Life & certainly this business takes a village. I love you all and I can’t wait to share this chapter of the journey with you. THANK YOU FOR YOUR SUPPORT! 🔥😘🍾

Since the original Dynasty, Alexis Carrington and Dominique Devereaux battled fiercely. In the original, it was Joan Collins versus the late, great Diahann Carroll. Now, it is Elaine Hendrix versus Michael Michele, “worthy” adversaries.

We know that Alexis has an incredible soft spot for Dominique’s son, Jeff Colby. Dominique double crossed her son and Alexis may feel the need to make Dominique pay.

When Nicollette Sheridan surprised fans when she appeared as Alexis Carrington, Dynasty fans cheered. Immediately, she was the best-known name on the reboot because of her Desperate Housewives fame.

But, she departed in the midst of Season 2. She left the show for personal reasons. Her mother was given a serious cancer diagnosis. Naturally, she wanted to spend as much time with her mother as possible.

To explain this character change, the writers had Adam (Sam Underwood) push his mother’s face into the fireplace. Becauses of this injury, she was forced to get plastic surgery. When the bandages were removed, the new Alexis Carrington was revealed. It was none other than Elizabeth Gillies!

Liz Gillies moved like Sheridan and seemed delighted to match Sheridan’s slightly British accent. The last we saw of the second Alexis Carrington was when she headed off for more plastic surgery. Dynasty fans want to see Alexis back. And most importantly, they want someone to stop Adam Carrington!

Dynasty fans, what do you think of Elaine Hendrix cast as Alexis Carrington?Be sure to check back with TV Shows Ace for the latest Dynasty news. Dynasty airs on The CW on Friday nights. In short, international fans will have to wait until the season ends to binge the full series on Netflix. This should be in early June.

The ‘Pawn Stars’ Crew Were Famous Before Their Own Show
‘Sister Wives’: Christine Brown Gives Robyn A Big Slap In The Face With Latest Move?
Lance Bass Dishes On His ‘BIP’ Experience, Plus Engagement Predictions
‘Sweet Home Sextuplets’: Courtney Waldrop Shares EXCITING Step With Girls
Why Wasn’t Michael Allio Chosen As ‘The Bachelor’ 2022?