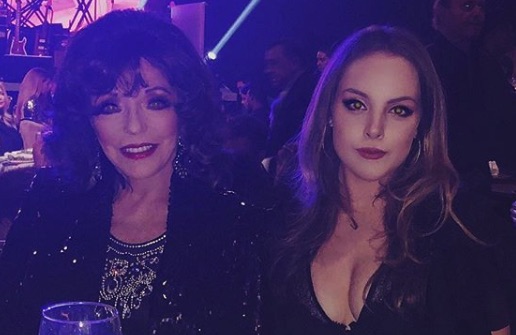 The Dynasty Instagram reminds us that it is back on Friday. Fans have already met their third Cristal, in three seasons. Now they wonder when will we see who’s the new Alexis Carrington? Some behind-the-scenes video Instagram footage may have already revealed the actress playing an iconic role. This is someone that Elizabeth Gillies has already worked with! What do we know?

Their family drama is B A C K. Stream the season premiere of @cw_dynasty free now on The CW App! #Dynasty

Dynasty fans have already become acquainted with another Cristal Carrington, but now they want to see who is playing Alexis Carrington? Who could be replacing Nicollette Sheridan? Clever Dynasty fans have revealed that Michael Michele (Dominique Deveraux) may have accidentally revealed that Elaine Hendrix is the new Alexis Carrington. Michael Michele has been filming behind-the-scenes videos, happily promoting the show. One cleaver Dynasty fan noticed this chair and it does not take a lot of extra effort to surmise that Elaine could be the new Alexis.

Who Is Elaine Hendrix?

Who is Elaine Hendrix? Anyone who saw The Parent Trap with Lindsay Lohan and Dennis Quaid will remember Elaine Hendrix as the wicked stepmom-to-be, Meredith Blake. As Meredith, she was conniving, formidable and downright evil.

Hendrix has already worked with Dynasty star, Elizabeth Gillies (Fallon Carrington). Both starred in the Denis Leary comedy, Sex, Drugs & Rock & Roll. Hendrix played Ava Delany, a sort of stepmom to Gillies’ rebellious singer, Gigi. It would be easy to see how the two could brilliantly play contentious mother and daughter.

What may make skeptics hesitate over this rumor is that Deadline recently reported that Elaine Hendrix will be starring in The Country Club. If she is the new Alexis, could there be a scheduling conflict with this movie?

There seems to have been a lot of cast changes on Dynasty. Basically, there have been two roles changed: Cristal and Alexis. The original Cristal Carrington was Nathalie Kelley. She departed after the first season. She revealed she was “happy to have her life back,” although it seemed that her departure was a mutual decision. Next, the CW brought in telenovela star,  Ana-Brenda Contreras came in for the second season. Above all, this was “the real” Cristal Jennings. Now, Daniella Alonso is dipping her toe in the Cristal pool. Hopefully, third time’s a charm.

When Nicollette Sheridan appeared as the Alexis Carrington, Dynasty fans rejoiced. Moreover, she immediately became the best-known name on the reboot. Most of all, the former Desperate Housewives star played her role with tongue firmly placed in cheek. So, when in the middle of the second season, when she announced that she was leaving Dynasty due to personal reasons, fans mourned. As difficult as this decision was, Nicollette’s reason was understandable. Unfortunately, her mother was diagnosed with stage 4 cancer. Above all, as Dynasty films in Atlanta, and her mother resides in Los Angeles, it was difficult for the actress to stay in her role.

There was a new Alexis for a short time. Elizabeth Gillies played Alexis. Thanks to some clever writing, it all made sense. Alexis had plastic surgery that youthened her to look exactly like her daughter Fallon. Liz relished the challenge of playing multiple roles. Her brilliant acting skills shone, as she moved like Sheridan and matched Sheridan’s slightly British accent. Subsequently, the last we saw of Alexis Carrington was when she headed off for more plastic surgery. To sum it up, this was towards the end of Season 2. Fans are ready for Alexis to appear Season 3. Most importantly, will it be Elaine Hendrix, or could it be another actress?

Dynasty fans, what do you think of the possibility that Elaine Hendrix will portray Alexis Carrington? Share your comments and be sure to check back with TV Shows Ace for the latest Dynasty news. Dynasty airs on The CW on Friday nights. In short, international fans will have to wait until the season ends to binge the full series on Netflix. This should be in early June.