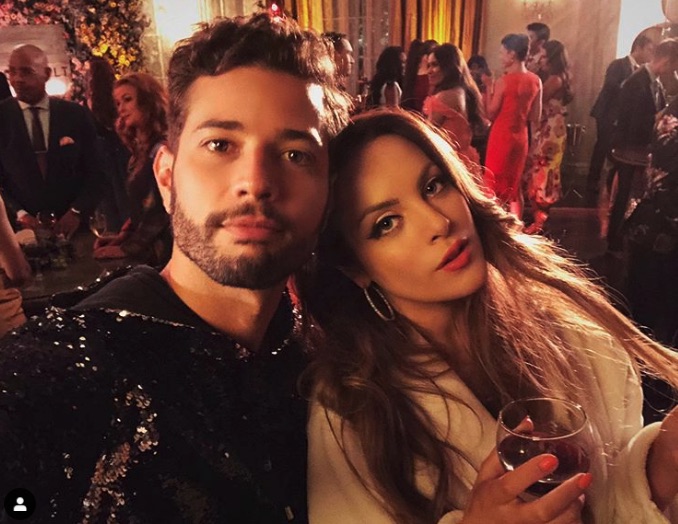 On Friday, the Dynasty Season 3 promo was finally released! What do we know about the story-lines in the new season of Dynasty on the CW?

Dynasty Season 2 ended with not one, but two dead bodies in the lake in front of the Carrington estate. But, Season 3 appears to be right back into party mode. The Dynasty Season 3 preview clip shows an opulent cocktail party, most likely the Carrington Foundation Fundraiser. Blake (Grant Show) is all guzzled up in a tux, standing across from third Cristal (Daniella Alonso). Both are watching Fallon (Elizabeth Gillies) angrily storm across the room. Although she is dressed to kill, in a low cut sparkly white disco number, she doesn’t look like she is in the partying mood. She only slows down to her brother Adam (Sam Underwood), who chides her, “Fallon, need a hug.” She then proceeds to violently push him into a table, to Blake’s chagrin.

Sounds like Fallon is in no mood to deal with any nonsense in Season 3! What is she dealing with this season? Let’s just start with the first episode.

According to the Futon Critic, the Dynasty Season 3 premiere episode is called “Guilt Trip To Alaska.” It doesn’t sound like anyone is headed towards the Arctic Circle to the 49th state anytime soon. Instead, Blake, Fallon, Cristal (Daniella Alonso), and Adam, and Anders (Alan Dale) need to coordinate their stories, as the homicide detectives try to close in on the two dead bodies.

Meanwhile, Dominique Deveraux (Michael Michele) appears to be looking for her missing son, Jeff Colby (Sam Adegoke). Where did Jeff go? In jail, Michael Culhane (Robert Christopher Riley) is trying to prove his innocence and that he was framed. Kirby (Maddison Brown) visits him, but finds that she is no longer welcome to Carrington Manor. Apparently refusing to sell back Fallon’s publishing company has made her homeless!

Thanks to the preview clip, we get the first look at the new Cristal Carrington, Daniella Alonso. Clearly, she is just replacing Ana Brenda Contreras, instead of introducing a totally new character as they did in Season 2 when they introduced Cristal Jennings. Cristal’s family is still formidable, as Cristal is seen telling someone “You don’t want to mess with my family.”

But what about Alexis? Who is replacing Nicollette Sheridan, who left in the middle of Season 2, due to personal reasons? Right now, the Dynasty producers have been absolutely silent. In the new preview, there appears to be a sort of masquerade party, with Fallon dressed up as Marie Antoinette. This could be a great opportunity to surprise fans and unveil a new Alexis. What about the long awaited return of fan favorite, Steven Carrington (James MacKay)? This could be a great opportunity to bring him back!

Thank you to everyone at Dynasty for wishing me a Happy Birthday! You guys are the best!🤗 And the cake was delicious! 😋

Oh No! Anders Is In A Red Shirt!

During the preview, at the masquerade party, we see Sammy Jo (Rafael de la Fuente) and Anders  enjoying a toast. But what is Anders doing in a Star Trek red shirt? Doesn’t he know the joke about the Enterprise crew in red shirts? They never come back alive! Should we be worried about Anders?

The Dynasty costume department continues to Sammy Jo who is dressed in a blue brocade jacket, with silver grommets at the neck. His look is complete with a pair of fancy aviator-style glasses. What about the new hotel venture between Sammy Jo and Anders? Hopefully, we will see both men create something incredible!

Dynasty fans, are you waiting for the Season 3 preview to be released? Share your comments and be sure to check back to TV Shows Ace for the latest on Dynasty. Dynasty Season 3 returns to The CW on Friday, October 11 at 9/8 CT.