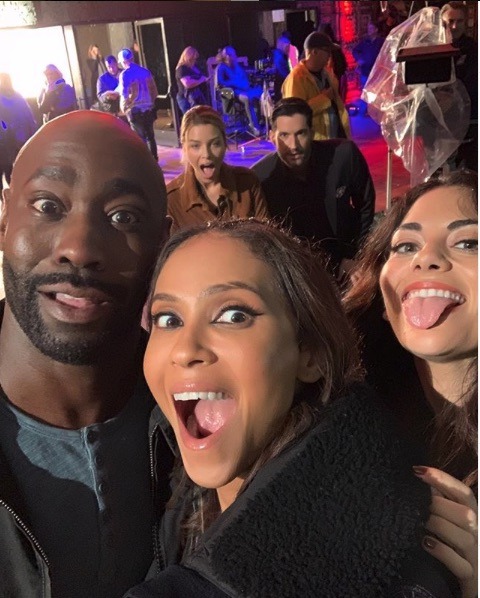 Lucifans got their wish! Their favorite show, Lucifer, renewed for Season 5! But the news is bittersweet. This will be the finale season of the Netflix show. Why will this be the last season of Lucifer?

Lucifans have been waiting for the news of Lucifer renewed for a fifth season since Season 4 dropped on May 8. It was assumed that it would be around June 8 that a renewal announcement would be made. Lucifans felt quite confident that their beloved show would return. It has been a worldwide trending show since it dropped. It was at the top of the binging list for four weeks straight, even beating out Game of Thrones. So fans were thrilled to see a video of Tom Ellis shouting “woos.” He then stopped to say, “see you in hell.”

Tom was clearly in Los Angeles, not in the beachy honeymoon spot that he and his new wife, Meaghan Oppenheimer were celebrating after their nuptials. On June 1, the couple married in front of family and Tom’s Lucifer costars and producers, including Lesley-Ann Brandt, Lauren German, Kevin Alejandro, D.B. Woodside, Aimee Garcia, Rachael Harris, and co-showrunners Ildy Modrovich and Joe Henderson. It appears that Ellis, and perhaps the rest of the cast, knew before his lavish wedding that the show would  be renewed. Perhaps this wedding celebration had a double meaning. They most likely all knew that Lucifer Season 5 would be the final season.

Whoop whoop!!!! Season 5 is coming!!! Thank you to our beautiful Lucifamily for all of your love and support!! And to @LuciferNetflix for being the best partners EVER!! It’s our final season so we’re planning to make it COUNT!! ❤️❤️❤️😈😈😈 #Lucifer #LuciferSeason5 https://t.co/0dIUYGpRJL

In the midst of the celebration that Lucifer renewed for another season, was the realization that this will be the end. A lot of fans missed the whole picture as they were just celebrating the renewal. The news became bittersweet when that renewal also revealed that this will be the finale season. Tom Ellis posted on social media,”Well look what happened” A 5th and final season of #Lucifer is coming to @LuciferNetflix thank you to all you loyal #lucifans for watching…now let’s end this thing properly.”

This is a shocker to fans who have heard showrunners Joe Henderson and Ildy Modrovich speak about their show. It always seemed that seven seasons was an ideal length to tell the story of Lucifer Morningstar and Chloe Decker. So when it was announced that the show was renewed for the fifth, and final season, this was a shock to fans. Fans want to know why the show is ending, especially as Netflix just saved it. Did Netflix only give them one season to resurrect the show? Did the producers fear that if they extended the show much longer that there would be a risk of not telling the full story?

Lucifer Season 5 Promises To Be ‘Awesome’

Fans don’t exactly have an answer to these questions. It seems that show writer and producer Chris Rafferty may have explained why the show will end now. His sentiments that “we get to finish the show on our terms” seems to echo Tom’s words “let’s end this thing properly.”

“It’s official – #LUCIFER WILL RETURN! For one final season. All good things must come to an end, and we feel blessed we get to finish the story on our terms. To all the LuciFans who worked so hard to resurrect us, THANK YOU for the chance to bring you a series finale you deserve!”

What we do know is that Lucifer Season 4 is incredible. Ildy and Joe have been talking about their “awesome” plans for Season 5. They know that this is the end, and they want to give Lucifans a wonderful ending.

Hopefully, this will mean a happily ever after for Lucifer and Chloe. Because it is the final season, they should tie up these loose ends.

It’s official – #LUCIFER WILL RETURN! For one final season. All good things must come to an end, and we feel blessed we get to finish the story on our terms. To all the LuciFans who worked so hard to resurrect us, THANK YOU for the chance to bring you a series finale you deserve! pic.twitter.com/9xKu5bF35j

Lucifans, how are you taking the bittersweet news now that Lucifer renewed? Are you looking forward to an “awesome” Lucifer Season 5? Share your feelings and Season 5 predictions in the comments field. Check back with TV Shows Ace for the latest in Lucifer news.