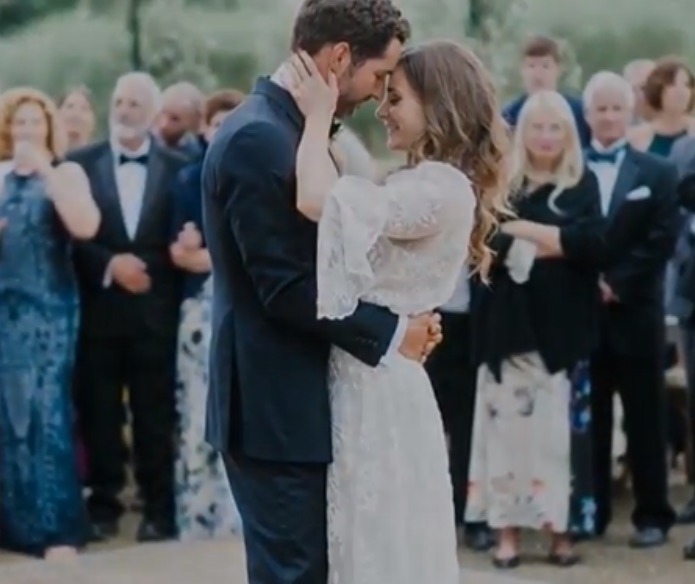 Lucifer star Tom Ellis married his fiancée Meaghan Oppenheimer in front of his family, including his Netflix costars recently. The couple has only posted two photos of their blessed nuptials, but the members of the Lucifer family filled in the gaps. What do we know about this opulent wedding?

The past month has been pretty extraordinary for Lucifer star Tom Ellis. His show, that Netflix saved just a year ago, is being streamed by millions of fans and trending worldwide. On June 1, he married his beloved fiancé, screenwriter and producer Meaghan Oppenheimer.

Although there has not been any official information on where the couple married, fans quickly realized that Tom and Meaghan wed in the Santa Barbara wine country region. A day before the blessed event, Lesley-Ann Brandt, who portrays Mazikeen on Lucifer, had posted to her social media that she was wine tasting. She was at Tensley Wines, in Los Olivos, according to her location stamp. This is an idyllic area for a dream wedding. Tom’s sister Anwen Stone, posted a beautiful photo with the hashtagged words, #FamilyWedding and #Santa Barbara. Fans could easily decipher that this was a Santa Barbara wine country wedding.

Turns out that they were married at the gorgeous and elegant Grassini Family Winery in Santa Ynez. It is happily located near Happy Canyon, which makes this even more delightful. The bride wore a bespoke Naeem Khan white lace gown and velvet Mary Janes. According to the Daily Mail, she painted her nails in a red-orange color. She had nine bridesmaids, all in white, all in different designed, sleeveless white gowns. After they became man and wife, they walked down the procession to The Carpenter’s hit, “Top of the World.”

Thanks to Lauren German, who plays Tom’s love interest Chloe Decker, we saw the gorgeous place setting from the wedding. There was no information shared as to what was consumed at the wedding feast.

Tom Ellis And Meaghan Oppenheimer Are A Hollywood Power Couple

Tom Ellis and Meaghan Oppenheimer are a romantic team that supports each other. He appeared on her Facebook Watch show Queen America. He has been publicly supportive of her writing and her executive production skills. Lucifans know Meaghan well. Meaghan helped support Lucifer fans via social media in the #SaveLucifer campaign. She regularly interacts with fans and is very generous with her time. She has been as much a beloved part of the Lucifer family as the cast. Fans love to interact with her.

A fan tweeted a video clip to Oppenheimer of her then fiancé. Tom was recently at a convention in Rome promoting Lucifer and he talked about his upcoming nuptials. He joked about the two weeks of freedom, but then said “Meaghan, I love you and cannot wait to marry you.”  Meghan thanked the fan with an “Awwww,” and then worried what Tom was wearing!

Awwww 🥰 Thank you for sending me this and hope you all take good care of him over there this week. What on earth is he wearing??? https://t.co/is5uP7yhLW

Lucifer Cast Took Photos And Danced Away The Evening

Of course, the entire cast of Lucifer was all at the wedding. They were all dolled up and looking like they were having a blast. Lucifans will want to check out the social media of all of Tom’s costars for photos of the cast having fun at this big event. Perhaps the most fun post was from Aimee Garcia (Ella Lopez), who shared a video of the stars dancing, with the caption, “In case u r wondering if we really get along.” Here is one more reason for another dance number for Season 5! X-Men star and Tom’s longtime pal, James McAvoy also attended this wedding.

Other family was was there as well. Tom’s two daughters from his first marriage to Tamzin Outhwaite, Florence Elsie, 10, and Marnie Mae, six, were both in attendance. as was Nora, his oldest daughter, from a previous relationship.

Prior to their wedding, Tom and Meaghan addressed wedding gifts. Tom went to Twitter and thanked fans for asking about wedding gifts or charitable donations. Calling the gesture as “so kind,” they asked that donations be made to Planned Parenthood.

Perhaps Netflix will give Tom a different wedding gift? Fans are hoping for a Lucifer Season 5 announcement sometime in the next week. Could they make the announcement when Tom is on his honeymoon?

Ah the honeymoon. Both of them may be a bit preoccupied with other things. A couple of days prior to her lavish wedding to the Lucifer heartthrob, Meaghan posted to Twitter that she “just realized” that the third season of The Handmaid’s Tale will be premiering when she is on her honeymoon. She asked if she should “cancel the honeymoon?” The season premiere is airing on Hulu on June 5.

Clearly, her humor indicated that she was far from bridezilla mode. Fans posted memes with Tom Ellis and suggested that the two watch together. But, where are the couple going? Maybe they will share a photo from their romantic destination?

Have you been following the Tom Ellis and Meaghan Oppenheimer wedding social media posts from the different Lucifer stars? Share your sentiments for the newly married couple in the comments field. Check back to TV Shows Ace for all the latest on Lucifer.