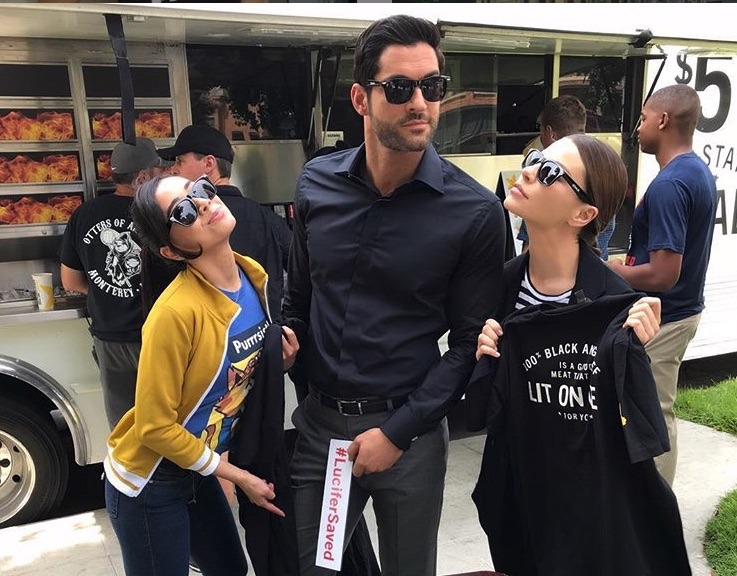 The Lucifer Season 4 dance extravaganza at the beginning of Episode 10 may be one of the most entertaining three minutes in the history of Lucifer. In an episode that finally gave Lucifans what they wanted, but resulted in heartbreak, there was absolute magic in the opening dance extravaganza.

In the Season 4 finale episode, “Who’s da New King Of Hell,” Kenny Loggins’ song “I’m Alright,” which was originally the theme song for the Bill Murray movie, Caddyshack, may now forever be associated with Lucifer. In rhythm with the catchy 80’s tune, Lucifer Morningstar (Tom Ellis) gets up from his penthouse loft at his nightclub Lux, goes down into the club, swigs a drink and expertly starts dancing with his club dancers.

Suddenly, he is at the police station, walking down the steps. He grabs Ella (Aimee Garcia) by the hand and lifts and spins. Suddenly, Detective Dan (Kevin Alejandro) walks towards him, and playing Baby to Lucifer’s Johnny, they do the perfect Dirty Dancing lift and Dan is suddenly flies out of the screen. The cast of the police station joins along in an absolutely joyous dance number that is one of the biggest treats in the excellent Lucifer Season 4.

Lucifer showrunner Ildy Madrovich explained to Entertainment Weekly that this scene was the final one shot and a it was a “fantasy come true.” She revealed that they all learned how to do the dance, including Joe Henderson, the other Lucifer showrunner.

“The opening dance number is such a fantasy come true for me. I was giddy with excitement through the whole thing. I learned the dance along with the cast, so did Joe.”

This scene became a season-ending party. The exuberance of the dance number seemed to be thank you to the fans who helped save the show. The drama that this cast and crew went through after being canceled had to be so emotional. Ending it a song and dance seemed like a release.

“We were drinking champagne, we were dancing, it was so much fun! Oh my god, [Kevin Alejandro] flying through the air! The whole thing was just us being silly, and it turned out so well! It exceeded my expectations. That’s just one of my favorite moments in the whole show really.”

Okay!! Here’s @tomellis17 and I watching a rehearsal of the dance in ep 410. I may or may not be crying with happiness. #Lucifer #LuciferSeason4 pic.twitter.com/hh5MWgTHwg

Madrovich even tweeted a photo of herself, along with Tom Ellis, watching the dance rehearsal. She confessed that she “may or may not be crying with happiness.” Music is such a big part of the Netflix show. Both Ellis and Lesley-Ann Brandt, who portrays Mazikeen, turned out stellar vocal performances for this fourth season.

The love of music is shared with the cast. Back during the early Fox days, the Lucifer cast and crew had gone out and did some karaoke. There, it was discovered that many cast members had mega-musical talent, Madrovich included. Before she was a writer and showrunner, she was the lead singer of the 90’s LA band, The Heavy Woolies. In the past, she has shared her dream of creating Lucifer: The Musical for one episode. Maybe fans will see that in Season 5? Hopefully, Netflix will make that happen!

What did you think of the Lucifer Season 4 dance number? Are you a fan of watching the cast sing songs and dance? Do you think Lucifer deserves a Season 5 from Netflix? Share your comments and opinions below. All four seasons of Lucifer are currently streaming on Netflix in most countries, including the United States. Those in the U.K. will need to stream the first three seasons on Amazon, before watching Season 4 on Netflix.