Now that Bachelor in Paradise has wrapped fans want to know who made it. While the show won’t air until August, Bachelor nation is full of sleuths combing social media. They’re looking for clues that rumored couples are together.

Bachelor in Paradise has brought some rockstar couples like Dean Unglert and Caelynn Miller Keyes and Dylan Barbour and Hannah Godwin. Now with a carousel of guest hosts and some favorites on the beach who knows what’s going to happen? Some of the fan favorites that have been rumored to be on the beach include, Noah Erb, Ivan Hall, Abigail Heringer, Pieper James, and more.

Who From Bachelor In Paradise Did He Spot?

Most of the time, the Bachelor in Paradise couples keep away from each other. Thanks to Reality Steve, there’s one couple that fans know can’t stay apart. Steve revealed only three couples left the beach engaged. Though, reportedly some others left together as couples.

Stop reading now if you want to avoid spoilers. Serena Pitt from Matt’s season and Joe Amabile are the couple. Joe had been to Paradise before and found love with Kendall Long. It wasn’t meant to be for the couple. Kendall reportedly was also on the beach according to Reality Steve, but she had a hard time seeing Joe happily falling in love with someone else.

Serena Pitt is someone fans are happy to see on Bachelor in Paradise. From her adorable entrance where she used a step stool to meet Matt James, to her honesty about how she felt everyone loved her. Serena made it to hometowns but ended things realizing Matt wasn’t the one for her. 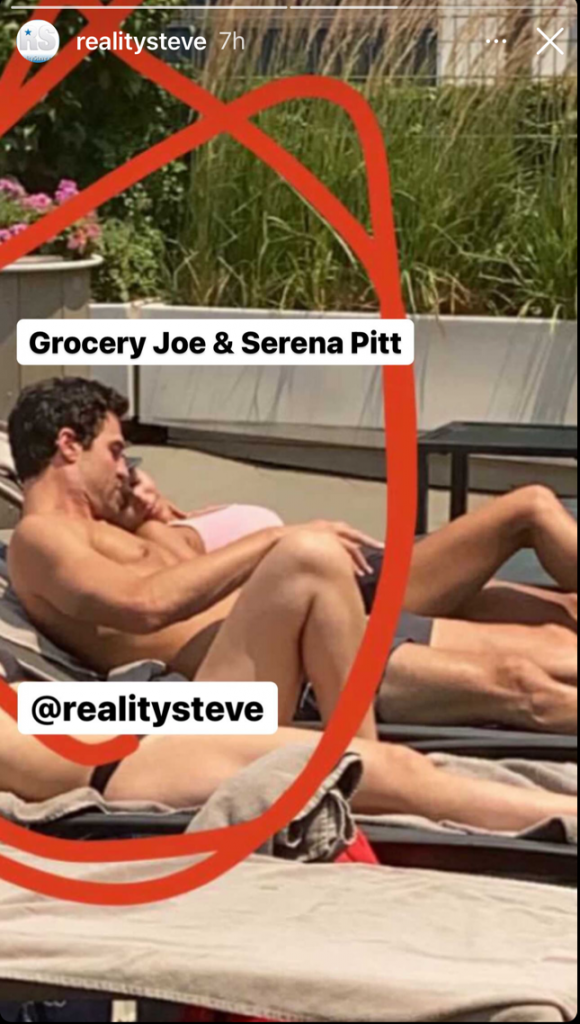 Now, with a second chance at Paradise and the picture up above it seems she made the right decision for herself. Joe was on Becca Kufrin’s season, also rumored to be on the beach, and went home week 1. He has spent the time since breaking up with Kendall on a podcast with Tayshia Adams and Natasha Parker, Click Bait. Known as ‘Grocery Store Joe,’ Bachelor nation still finds him adorable.

In a video where Joe talked to Mike Johnson, he said there were a “handful of women he’d be interested in meeting.” After Mike pushed a bit he said, there’s someone from Matt’s season I find very interesting.” It is possible he was talking about Serena. He went on to say he has to meet someone in person. Joe said he needs to get a feel for them to know if it’s going to work. What do you think about this BIP couple? Do you see them making it down the aisle? Comment with your thoughts down below.