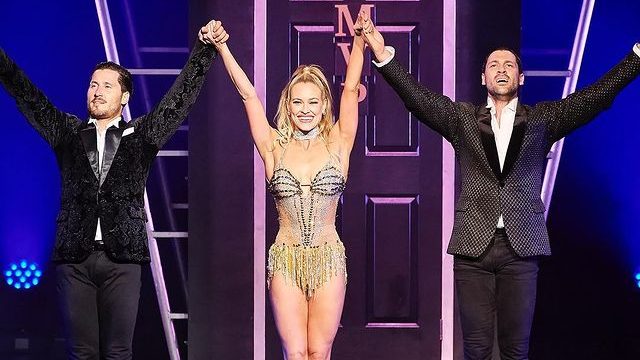 Dancing With The Stars fans always enjoy a good tour. The Chmerkovskiy brothers had a really great tour planned for 2021. But the COVID-19 pandemic got in the way of things. Maks, Val, and their team made the heartbreaking decision to cancel the big tour they had planned this year.

However, it’s not all bad news. Maks and Val managed to reschedule the tour dates and it will be known as “Maks & Val: Stripped Down.” They recently gave ET‘s Lauren Zima a backstage tour to promote the show.

But what can we really expect to see from the show? Maks went on to add that the show will definitely be family-friendly — but the Chmerkovskiy brothers still plan on taking their shirts off. The dancers and their crew kick off their tour in Walnut Creek, California on July 24.

The Chmerkovskiy brothers are very excited to perform on tour again

Maks and Val are definitely ready to get back on the road. Being unable to tour and perform definitely harmed their mental health.

“I was very depressed for a very long time, not being able to go out and perform, do what I love and also interact with people,” Val admitted to ET. “In front of a lens performing is one thing, but being live, this is where we are at our best. Because there is that spontaneity, that relationship with our fans and the audience in general. It’s ecstatic.”

“For me, it was a devastating blow thinking of me as, like, somewhat of an athlete at the end of his career, having that last final chance of things to get that chip, that championship trophy,” Maks added.

Will Maks ever come back to Dancing With The Stars?

Val still competes on Dancing With The Stars, but Maks hasn’t appeared on the stage for quite some time. He did come in second place on The Masked Dancer, but DWTS fans wonder if he’ll ever come back to the ballroom. Of course, the subject came up in the interview with ET.

“This is a natural way of things. I created a big void when I left. I do have to probably with a pat on the back acknowledge that, which was successfully filled by people who by people, by characters, by talent, by incredible dancing, I would only wish that the show remains,” Maks Chmerkovskiy replied. “Am I going to be on it? Most likely not. I just don’t have the emotional capacity to withstand what the show is today and I don’t know how I did it back then either.”

However, Maks did add that he would continue to watch and cheer for the show. His wife Peta Murgatroyd and sister-in-law Jenna Johnson also compete. Val added that he would absolutely come back if the show’s producers asked him.

“I love the show. I love how many opportunities that it created for us, and for dance in general,” Val excitedly said. “We were talking about that yesterday, how dance had such a golden age, if you will. And part of everything that happened last year, with everything coming to a hold it’s like, ‘How are we still going to be a priority as an entertainment form?'”

Will you be seeing Maks and Val Chmerkovskiy on tour? Be sure to let us know!

‘You, Me, And My Ex’ Alex Hines STILL Defending Relationship With Caroline
Lisa Rinna Stars In New ‘Days Of Our Lives: Beyond Salem’ For Peacock
Isabel Roloff Gets Real With Fans, Opens Up About Forgiveness
‘The Young & The Restless’ Spoilers, July 26-30, 2021: Phyllis Gets The Goods, Sally Panics
‘Little People, Big World’ Preview: Amy Roloff Chooses A Ring Bearer