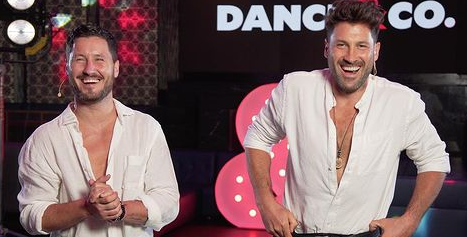 If you planned to see the Chmerkovskiy brothers on tour this year, you’ll really be disappointed to hear this news. Both brothers officially confirmed their 2021 tour schedule is now canceled. When Maks and Val planned the tour, they really hoped the world be in better shape. However, the novel Coronavirus pandemic has put a wrench into many summer plans. The Dancing With The Stars official tour abruptly ended last year too.

The official tour page posted an announcement, as well as Maks and Val’s individual Instagram accounts.

“It is with great sadness and disappointment that we must announce the cancellation of our upcoming summer 2021 @maksandvaltour This breaks our hearts, as we LOVE what we do and the stage is our second home and you are our extended family!” the post began.

“We’ve waited as long as we could to make this decision, in hopes there would be more clarity and a clearer direction as how to make this possible. Thankfully, there is so much progress being made, but this tour takes us to over 50 different cities across the country with a wide variety of safety restrictions in place. The safety of our cast, crew and fans remains our number one priority.”

The post went on to say that ticket refunds will be automatically issued. So don’t worry. If you purchased tickets, you will get your money back.
⠀
“We want to thank all of YOU for your dedicated support and love and we can’t wait to take the road again in the future!! Stay safe and healthy!” the post concluded.

The Chmerkovskiy brothers had been heavily promoting the tour for quite some time. After a disappointing 2020, they really hoped they could give their fans a fun experience. Their wives, Peta Murgatroyd and Jenna Johnson, planned to accompany them this summer.

What will Maks and Val do now that there is no tour?

The Chmerkovskiy brothers are probably pretty bummed out about canceling the tour. However, they really want to do the right thing for everyone involved and fans too. But they won’t have any shortage of projects to keep them going throughout 2021.

For starters, ABC renewed Dancing With The Stars for Season 30. We don’t know the pro cast list yet, but fans can probably expect to see Val, Peta, and Jenna competing this fall. Mak recently competed on The Masked Dancer but says he has no current plans to return to DWTS.

Many fans are really sad they won’t get a chance to see the famous brothers on tour, but you can still keep up with them on social media. And don’t forget to tune into DWTS this fall and see Val, Jenna, and Peta compete too.

Did you have tickets for the tour? Are you disappointed about the decision, or do you understand? Let us know what you think in the comments.