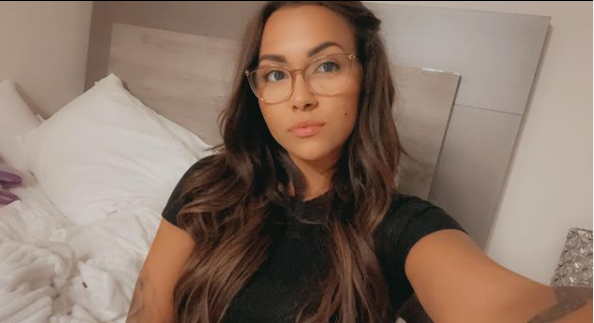 Teen Mom 2 fans are choosing sides on social media after comments from Briana DeJesus went viral. The 27-year-old reality mum called out two fellow castmates in her Instagram posts, letting the world know she thinks they are fake.  Who did Briana throw under this bus this week? Read on to get the dirt on the latest Teen Mom drama.

While Teen Mom 2 fans were maybe expecting some drama in tonight’s new episode – they were not expecting offscreen drama. Needless to say, viewers were shocked when Briana DeJesus popped up on social media casting shade at the other ladies on the show. What is she venting about? Well – according to her posts, Briana feels that authenticity is something that is lacking on the show.

In an Instagram story posted earlier today, Briana puts castmates Kailyn Lowry and Ashley Jones on blast, calling them out for presenting sunshine and roses view to fans. She accuses them of picking and choosing what parts of their lives go public during episodes.

“Ashley’s house really ain’t her house,” she began in her rant, ” MTV films at a rental. Kail doesn’t want to film about breaking and entering into Chris Momma house and beating him for cutting his child’s hair.”

After letting that bomb drop, she goes on to say that fans watching her storyline get nothing but truth. “So who is really fake,” she asked in her post. “I film it all and I will continue. Leave the franchise if you don’t wanna show your whole life.” 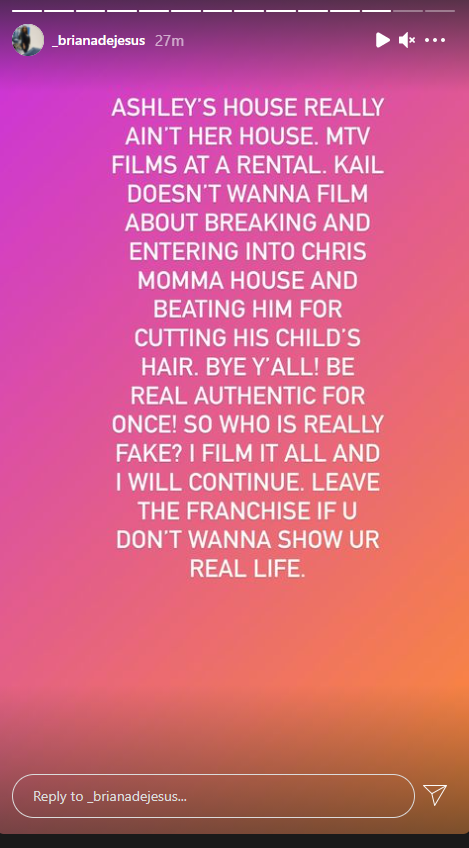 While Briana’s first post was enough to officially start some drama – she wasn’t done yet. Minutes later, a second post popped up in her story feed. After calling out the other Moms on the show for being fake – Briana felt the need to reinforce to followers that with her, what you see is what you get.

“I take pride in the townhome I bought with the money I earned by filming my true story,” she wrote, “My name and brand aren’t fake. Let’s all get a grip.” At this point in the post, she seems to be throwing her shade directly at Kailyn Lowry – as she is the cast member with the most prominent ‘brand.’ She then redirects back to Ashley saying: “I don’t ask MTV to use a different house to film in and I don’t hide anything.” She concludes by reminding viewers that she’s ‘always honest’ and ‘doesn’t hide from the crew’ when it’s time to film her ‘true story.’

Fan’s Weren’t So Happy About The Posts

While Briana DeJesus likely thought that she shining up her image – fans say she did the opposite. While it may be true that Ashley films in a rental or that Kailyn opts to leave certain things out of her shoots – casting shade on the other mommas backfired on her. Show fans and social media followers immediately jumped into the comment section, lashing out at the reality celeb for throwing the other girls under the bus.

Commenters on Facebook had quite a bit to say about the situation. “Brianna isn’t authentic though. She misconstrues the situation with Devoin all the time to look better,” one commenter quipped. “She is so fame-hungry it’s embarrassing,” said another.  Countless others pointed out that while there may be truth to her statements about the other ladies – it’s not really her place to say so. Many seemed to agree that the level of ‘authenticity’ of the other girl’s storylines doesn’t really affect her. Thus, they felt she needed to rethink her negative posts.

Fans across both Twitter and Instagram went on the attack, siding either with or against Briana. Each lady does have their own following – so while Briana did have some who agreed with her – those who disagreed with her actions seemed to far outweigh her fanbase.

Do you think Briana’s posts were warranted? Tell us what you think on social media! Find us across all platforms @TvShowsAce . Remember to check out our homepage daily for all the latest on your favorite reality celebs.