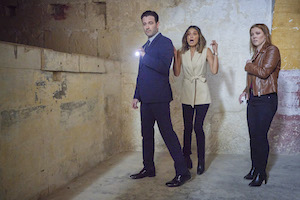 Hallmark Movies & Mysteries has a brand new signature movie filled with espionage and intrigue. This movie is called To Catch A Spy. They just filmed this movie on the historic island of Malta.

This movie stars Nathalie Kelley (Dynasty, The Baker and the Beauty, along with a real-life married couple, Broadway stars Colin Donnell (Arrow, Love On Iceland), and Patti Murin (Holiday For Heroes, Chicago Med).

#Sleuthers, are you ready for an international thriller, filmed in an exotic and historical location?

What Is Hallmark’s To Catch A Spy About?

According to the Hallmark synopsis, Chloe Day (Kelley) is a renowned travel writer. She and her team, including photographer Sara Webb (Murin), travel to Malta for an upcoming story about the newly renovated Hotel Optima.

Late on their first night at the hotel, Chloe hears an argument in another room, then sees a body fall from the balcony above hers. She is immediately drawn into an investigation. Moreover, she is the primary witness to the murder.

FBI agent Aaron Maxwell (Donnell) is staying at the hotel to investigate another crime at the US embassy but finds himself working with Chloe to solve the homicide she has witnessed. They must put the pieces together to find the killer before the killer finds them.

To Catch A Spy On Location In Malta!

Although this is not the first 2021 Hallmark movie that was filmed in Malta, this movie may show more of the historic island. The video preview shows the historic arches, harbor, and fortress. It is stunning! Be sure to check out the Instagram of all three leads for some personal photos taken in Malta.

Subsequently, the other movie was Mixed Up In The Mediterranean that starred Jeremy Jordan and Jessica Lowndes. Although there was less Malta, there were more laughs in this hysterical Hallmark rom-com.

When Is Hallmark’s To Catch A Spy Airing?

Also, be sure to hop on Twitter premiere night and follow #Sleuthers. Tweet along with Hallmark, including members of the cast, as well as your mystery-loving friends!

Although fans of The Baker and the Beauty and Dynasty are very familiar with the work of Peruvian-Australian actress Nathalie Kelley, this is her first Hallmark movie. However, based on the previews, it looks like Nathalie could be starting a fun franchise, filled with fun destinations.

Where would you like to see the possible To Catch A Spy franchise go next?

Be sure to catch the premiere of To Catch A Spy on Sunday, June 20, at 8 p.m. Eastern, on Hallmark Movies & Mysteries.

Derick Dillard Shares Amazing Coincidence 19 Years Later
Jenelle Evans Shows Off Weight Loss In Sexy Animal Print Bikini
Ready To Ride Into The Sunset With Hallmark’s ‘Taking The Reins’?
‘GH’ SHOCKING Spoilers: Esme Prince Daughter Of A Monster?
Jennifer Aniston Reveals She Is Not Attending The Emmys This Year And Why