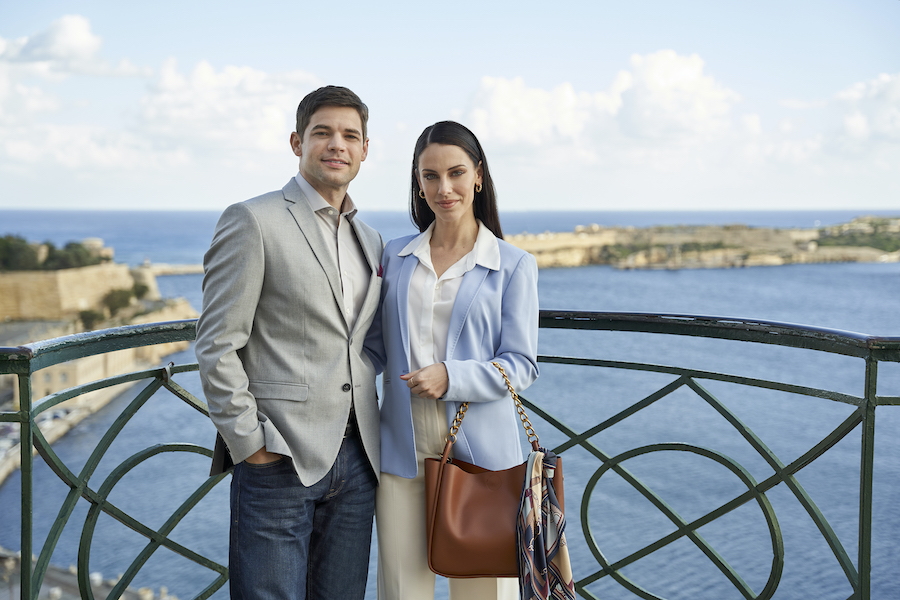 Ready for a tasty mix up? Hallmark’s third 2021 Love Ever After movie is Mix Up In The Mediterranean. The leads in this romance are Broadway star Jeremy Jordan (Smash, Holly & Ivy), Jessica Lowndes (Christmas At Pemberley Manor, Too Close For Christmas) and Callum Blue (Dead Like Me).

It appears that there is really a new Hallmark. February’s offerings are called “frisky” by a well-known When Calls The Heart star, who just so happens to be starring in one of the upcoming romances. We can only imagine that Mix Up In The Mediterranean also fits that bill! What can fans expect?

What Is Hallmark’s Mix Up In The Mediterranean About?

February is Love Ever After movies for the most romantic month of the year. What is Mix Up In The Mediterranean all about? According to the press release, Josh (Jordan) is a diner cook based in a small, Alaskan town. He is cooking at the place his folks once owned, and holds a dream of owning this place himself.

However, his cozy existence is disrupted when his twin brother, Julian (Jordan) is injured. Julian is a “big-city chef” and is well-known. He is due to compete in a high-profile culinary competition, with some of the best chefs in the world. So, the brothers decide to do a big switch. Now, Josh is on the worldwide stage.

Moreover, he meets Meg (Lowndes). This is Meg’s first big event and she sees this spotlight as an enormous opportunity to showcase her talents. This could be her big break. Sparks instantly fly between the two. But, there is a bit of a problem. Meg thinks Josh is Julian. In other words, Josh is single. He is free to flirt and even date Meg. But, Julian is married. Right now, Meg thinks he is some sort of a player.

How is Josh going to get out of this jam?

When Can You Watch Mix Up In The Mediterranean?

On Saturday, Erin Krakow went to Twitter to share a preview of the Hallmark Love Ever After Movies, writing “February’s looking frisky on @hallmarkchannel! #ItWasAlwaysYou @Tyler_hynes.”

Of course, the When Calls The Heart star, along with Hallmark hunk, Tyler Hynes, are in the highly anticipated Love Ever After movie called It Was Always You. There is a lot of buzz about this movie. This is the first time that Erin and Tyler have worked together. It Was Always You premieres on the Hallmark  Channel on Saturday, February 27, at 9 p.m. Eastern.