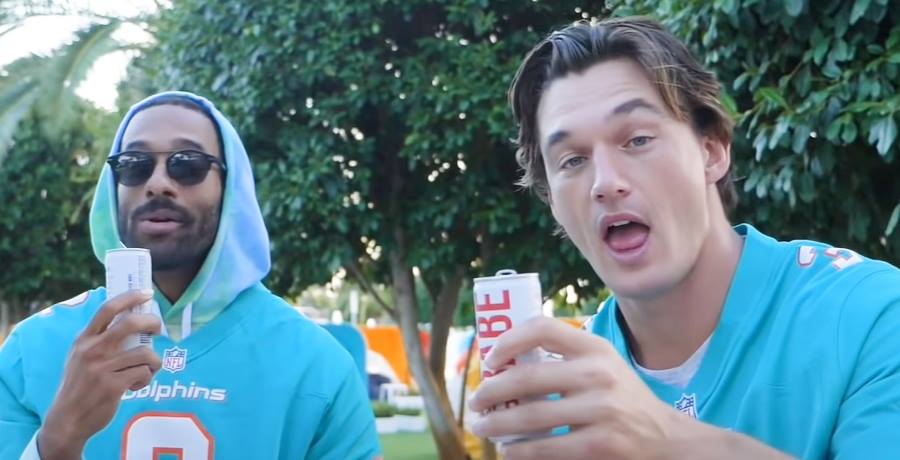 Matt James and Tyler Cameron are as close as ever. In a recent Instagram post where the two of them are hugging, Rachael Kirkconnell commented, “always the third wheel.” So, it makes sense now that the men are in relationships they want to double date. What’s better than a couple’s weekend in the Hamptons?

The boys took their other halves Rachael Kirkconnell and Camila Kendra to the opening of Bounce Beach Montauk, a restaurant. They reportedly danced and had a great time. Most likely Camila and Rachael have spent time together because their main squeezes are roomies. Reportedly both Camila and Tyler’s families are in Florida and they have traveled together to see them.

A person in attendance told E News, “all four of them mingled with the crowd and were happy to take pictures with everyone who approached them.” They also spent some time with Breaking Bad’s Bryan Cranston and Aaron Paul who created Dos Hombres Mezcal. They hosted a brunch at the same restaurant the next day.

Matt James had shared on The Pomp Podcast that Racheal said it’s time to do the work or she was leaving. That was just what he needed to hear and now they are talking about moving in together. Matt said, “I wasn’t really honoring that commitment that I made to working on the relationship. It was just a come to Jesus talk with Rachael.”

Tyler and Camila are also, “inseparable,” according to another source. Like TV Shows Ace reported the two aren’t strangers to traveling together. They went to both Cabo San Lucas and Mexico City.

Fans Liked Seeing The Foursome Out Together

Tyler Cameron got praise for his new love from fans on Instagram. A picture of them on the Eat Pray Gossip Instagram was captioned, “Not only is their body language off the charts but bach alum Tyler stunner Camila make the CUTEST COUPLE!” It’s clear from the pictures together and the smiles on their faces, Tyler and Camila are in it for the long haul. Bachelor nation couldn’t be happier for Hannah Brown’s sweet Bachelorette runner-up.

Fans are happy Rachael and Matt are making it work. One said, “I’m so happy you two are working on each other with each other.” Another said, “so glad she was given the chance to grow. Lift and push each other.”

From the look of it, things are going great between Rachael and Matt since they reconciled. The ultimatum obviously did the trick as the two appear to be more in love than ever.

What do you think about Tyler, Camila, Matt, and Rachael hanging out together? Comment with your thoughts below.