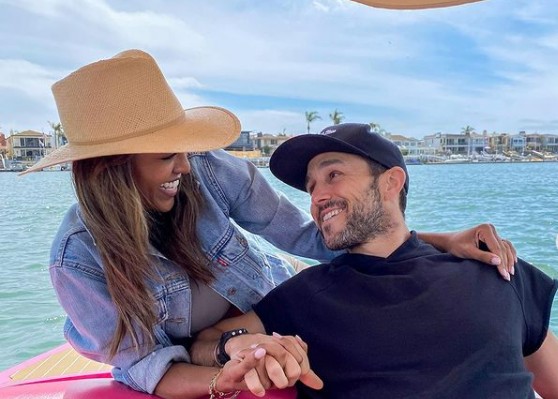 Fans are beginning to wonder if there could be trouble in paradise for one hot couple. It’s been a few weeks since fans have seen Tayshia Adams and Zac Clark post together. There have been no photos, no Instagram Stories, No comments. So, what is going on with these two Bachelorette faves? Did they break up and are holding off telling fans?

Did Tayshia Adams and Zac Clark break up?

The answer to that remains to be seen. This isn’t the first time rumors have flown that Tayshia Adams and Zac Clark have parted ways. When rumors first circulated, Tayshia was quick to shut them down. This time, however, neither of them have said a word. Today, for example, Zac is celebrating his Dad’s birthday. Tayshia is nowhere to be seen. Plus, fans are noticing. They commented asking where she is. Zac didn’t reply.

The last time these two posted a photo with or featuring each other was May 7 for Tayshia and for Zac May 3. Aside from pictures not posted together, Tayshia did give a sweet shout out to Zac when she won the MTV award. However, he wasn’t there with her. So what’s going on with these two?

Fans are also going crazy on social media with many speculating their silence means trouble. So many are cheering for these two to make it work.

While it seems there could be some issues, there are some positives that indicate they may still be together. Both Tayshia and Zac still follow each other on Instagram. Plus, Zac has liked every single post Tayshia has made. While there may not be comments since Mother’s Day, he has liked them.

Tayshia has also been liking Zac’s posts. Even today she liked the post celebrating his Dad’s birthday. Also, on the latest podcast of Clickbait, Natasha Parker asked Tayshia what Zac thought of her winning the MTV award. Tayshia said Zac was so proud of her. She went on to say he wasn’t there because he had a big thing planned with his clients.

So, it’s yet to be seen if there is really trouble in paradise or just life keeping these lovebirds busy. Some fans believe Tayshia has been staying at a hotel rather than with Zac. This is all speculation and rumors at this point. Hopefully, Tayshia and Zac will see fans concerns and address their relationship status soon.

In the meantime, there is only about a week left before fans will get to see Katie Thurston begin her journey as The Bachelorette. Are you excited to watch?

What do you think about Tayshia and Zac?