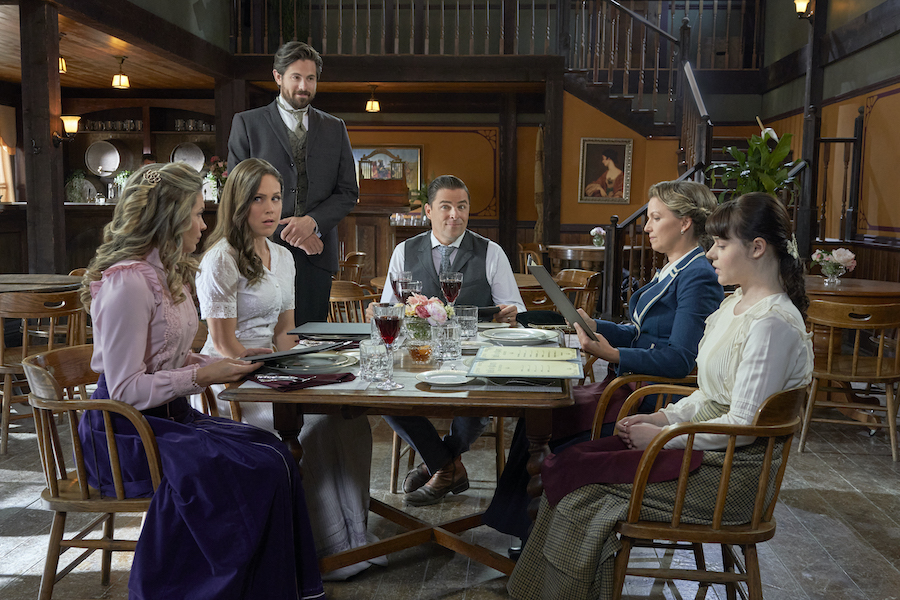 Elizabeth may have made her choice two weeks ago, however, there are still some frustrated When Calls The Heart fans. These Team Nathan fans feel cannot move forward from the triangle resolution.

However, there is one main reason for all of the objections to Lucas Bouchard, portrayed by Chris McNally. What is that objection, and how could showrunner John Tinker, and his team of writers easily resolve this problem?

Although it has been over two weeks since Elizabeth shocked Team Nathan and chose Lucas, all is still not peaceful with When Calls The Heart fans. These Hearties are greatly offended by this decision.

But a quick peruse through the cornucopia of WCTH groups, and Twitter threads, and you can see how so many object to Lucas. The most interesting part of that is because Bouchard owns a saloon.

Elizabeth tells Lucas his past could have taken her from her son. He says he would have done whatever it took to keep her safe. 💪🏼 Not all heroes wear capes, eh Lucas? 🦸‍♂️ #Hearties #AussieHearties #HeartiesUnite @welovegoodtv #SCHeartHome @ChrisMcNally_ pic.twitter.com/xKdMQmXCyV

Is The Hope Valley Saloon A House Of ‘Ill Repute’?

Although this may surprise those who do not watch When Calls The Heart, many Hearties who object to Lucas object to the sort of business that he owns. It should be noted that although it has never been a house of “ill repute,” those who object to Lucas continue to refer to the saloon as being that very thing.

Although the saloon does not house women of the night, have frequent bar fights, or anything remotely Deadwood-ish about it, you would never know it based on the social media posts.

This is the main attack on Lucas Bouchard’s character. Has the saloon always been held in such disdain?

What Is The History Of The Saloon?

One poster reminded fans before Elizabeth made her choice the realities of the saloon. “Our WCTH writers have never made the saloon a place of raucous behavior, as might be associated with some bars today. They have kept it more as a gathering place, and, as in the Christmas episode, a restaurant. If you watched LHOTP, Charles and Caroline once lived above a saloon that was loud and boisterous with “liquor-ed” up people below. The Hope Valley saloon has never been that place. So, in answer to your question, I would have no problem with Elizabeth choosing Lucas. None at all.” One fan thinks he should sell the saloon.

Another fan also pointed out, “Funny how nobody had a problem when the school was in the saloon…”

Then, there is the deep concern about a saloon owner as a father to baby Jack. ”

How The When Calls The Heart Writers Can Solve This Objection

What can the When Calls The Heart showrunner John Tinker, and the writers do to make fans happier? Perhaps it is time to rebrand the saloon. If they can make up who invented bandage strips, they can reinvent the saloon into a more G-rated venue.
Why not just give it the restaurant rebranding? This would solve the negativity associated with the saloon?

Will Team Nathan Forgive When Calls The Heart Writers?

Will Team Nathan ever forgive the writers on When Calls The Heart? We won’t know until February 2021, when the show should return. Fans promised to never return when Jack was killed off because Daniel Lissing wanted to leave. Subsequently, after he left, more fans watched the show.

Ronda Rich, who is married to John Tinker, the showrunner for the show, has asked Hearties to not give up on the series. She shared an impassioned post stating that she knows that her husband will do right by Nathan.

Well, she didn’t say Nathan. She said, “The suitor who isn’t chosen will get a lot of on-screen time and captivating storylines.” Will Team Nathan return to see this happen?

Perhaps after a few months of no WCTH, Hearties will be a little more forgiving? Meanwhile, they remain impassioned and outspoken on social media.

However, as one fan wrote, “Well it has been a night almost as entertaining as the show to read all these comments. Actually, it is hilarious. I love it. We have no lives and have all moved into Hope Valley.