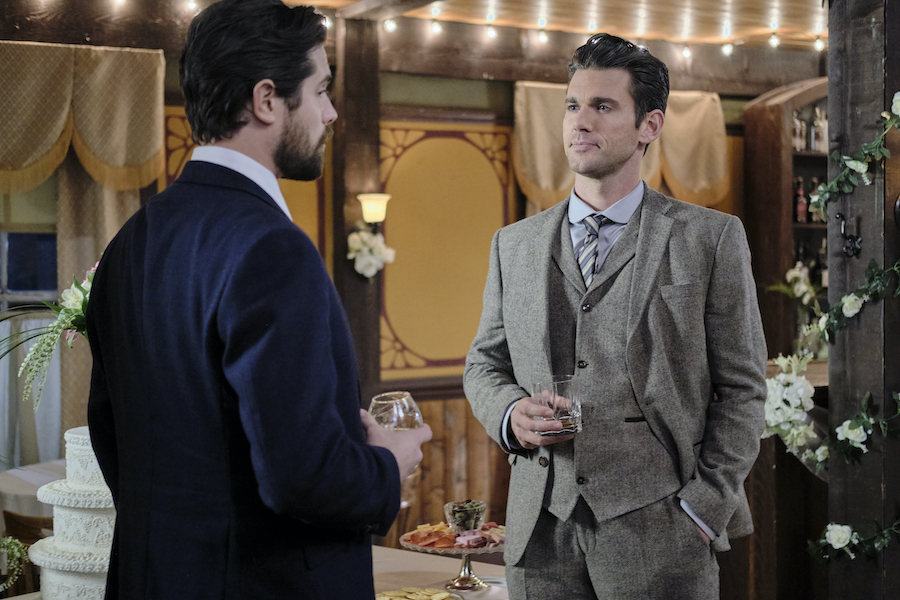 On When Calls The Heart Sunday night, Elizabeth will finally choose her guy. Will it be Nathan, the Mountie, or Lucas, the saloon owner and entrepreneur. In either case, there will be devastated Hearties. That is most have divided into one of two camps: #TeamNathan and #TeamLucas.

What if their guy doesn’t win the heart of the schoolteacher? Will those fans leave the series? Ronda Rich, John Tinker’s wife has posted a plea for fans to stay with the show. What did the WCTH showrunner’s wife have to say?

When you are a showrunner’s wife, you are privy to the information. Ronda Rich, who is married to “Tink,” When Calls The Heart showrunner, John Tinker. The two have regular Facebook Live events and talk to Hearties about the show.

However, as we get closer to the end of the love triangle, we get closer to one of the suitors getting his heart broken, and hopes shattered. Who is that guy? Well, Ronda started by revealing that she knew who Elizabeth chooses. She has known it since last summer. Moreover, this was a decision that was not taken lightly.

“I know who Elizabeth chooses and have known since last summer when Tink, the cast, and Hallmark discussed it off and on for three months. They took it enormously seriously.”

She went on to say that she knows that not everyone will be happy at the end of the season finale.

Ronda Rich Asks Fans To Be ‘Kind’ On Social Media

Moreover, Ronda Rich writes, “Some of you will be happy, some of you won’t with the choice she makes. Two things please: If you go on social media, please be kind with your upset. The cast, crew and, other Hearties deserve that. Be ye kind one to another”

Rich then continued to ask fans to be “a good ambassador” for Janette Oke, Hallmark, as well as the cast and crew. She points out that others in the television industry are paying attention to what happens here.

‘Please Don’t Walk Away’ From When Calls The Heart

Lastly, Ronda Rich asks Hearties to not discontinue watching When Calls The Heart if their guy doesn’t get picked. She asks fans, “please don’t walk away.” Ronda continues by saying that she is sure there will be a Season 9 of the show and that “The suitor who isn’t chosen will get a lot of on-screen time and captivating storylines.”

Why does she know this? She shared that “because I know John Tinker and I know that it will be compelling even with the triangle resolved.”

So, Hearties, are you ready for the When Calls The Heart finale? Will you accept the other guy as the winner here?