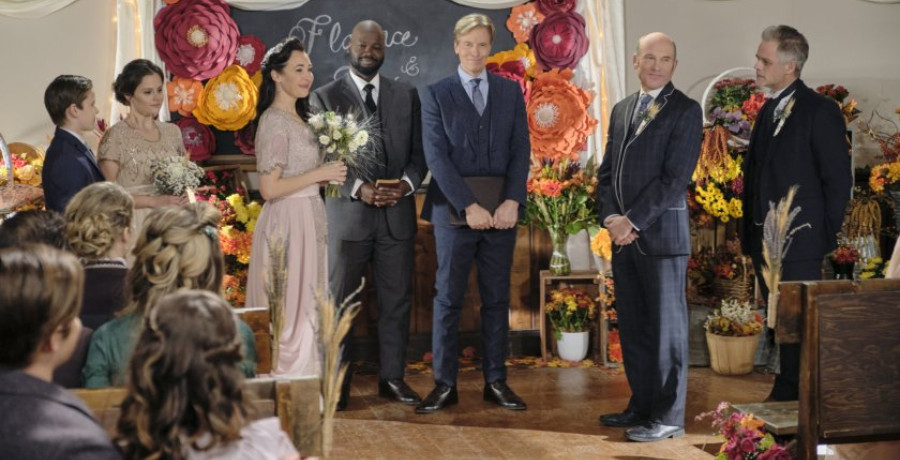 Hearties are getting excited about the When Calls The Heart Season 8 finale, entitled “The Kiss.” On Monday, Hallmark released more photos from the upcoming episode. Many of these photos are mild spoilers for the last episode.

What do the new photos reveal about the finale?

When Calls The Heart fans can start with something fun. That would be Mike and Fiona going out for a spin on a motorbike. She looks fearless, while MIke is a bit hesitant.

Either way, they promise a spark of romance. They also seem to indicate a sort of lightness that will carefully balance out Elizabeth’s final decision. That is because “The Kiss” will help end the love triangle. That means Elizabeth will choose one guy. Either it is Lucas or it is Nathan.

When this Season 8 finale episode airs, the love triangle will be shattered and Hearties will know who Elizabeth chooses. Meanwhile, expect a lighthearted romance between Mike and Fiona.

Bill & Molly Romance Continues To Bloom On When Calls The Heart

When Calls The Heart Season 8 may be the most romantic season ever. One of the hottest romances is between Bill and Molly. The season will not end without the loved-up couple getting together one more time. Are you ready?

Everyone watching When Calls The Heart Season 8 can now feel a bit calmer. Jesse is back, and Clara looks overjoyed. In another photo, Jesse looks to be ready for a trip. He is carrying some luggage. Moreover, Clara looks to be sending her blessing to him. Is he headed out on an important mission?

Could Faith & Nathan Make a Romantic Connection On When Calls The Heart?

While When Calls The Heart fans have been wondering whether or not Carson and Faith will get together, photos from the upcoming episode may indicate that there may be another person preventing them from uniting.

Faith is shown with Nathan. His hand is up and she has her finger on the palm of his hand. Is she reading his palm? Could she be checking out his love line? Or is this the beginning of a new romance? Who would you rather see Faith with, Carson or Nathan?

Why Is Lucas Alone?

In the When Calls The Heart “The Kiss” photos, there are none of Elizabeth. However, there is one of Lucas. He is alone and he is smiling. What does this mean? When last we saw, Lucas ended things with Elizabeth.

Now, this can go two ways. She could use this as a startling realization that she does care for the saloon owner and finally make a decision. The other option is that she can fully understand her feelings for Nathan and let him know.

Either way, it looks like Lucas doesn’t have a care in the world. Could Lucas end WCTH Season 8 satisfied and happy?

When Calls The Heart Season 8 Final Episode Will Be Supersized

Hearties be best prepared. On Sunday, May 9, the When Calls The Heart Season 8 finale episode will be supersized. On Facebook Live, Ronda Rich and her WCTH showrunner husband, John Tinker, have shared that they asked for a longer episode, and they got it!

That means more drama, more revelations, and, based on the title, “The Kiss.” Maybe someone will be kissing big ones. Will it be Nathan or Lucas? Either way, the love triangle ends with this longer episode.

Be sure to catch the premiere of When Calls The Heart Season 8 finale episode, entitled “The Kiss,” on Sunday, May 9 at 9 p.m. Eastern, on the Hallmark Channel.