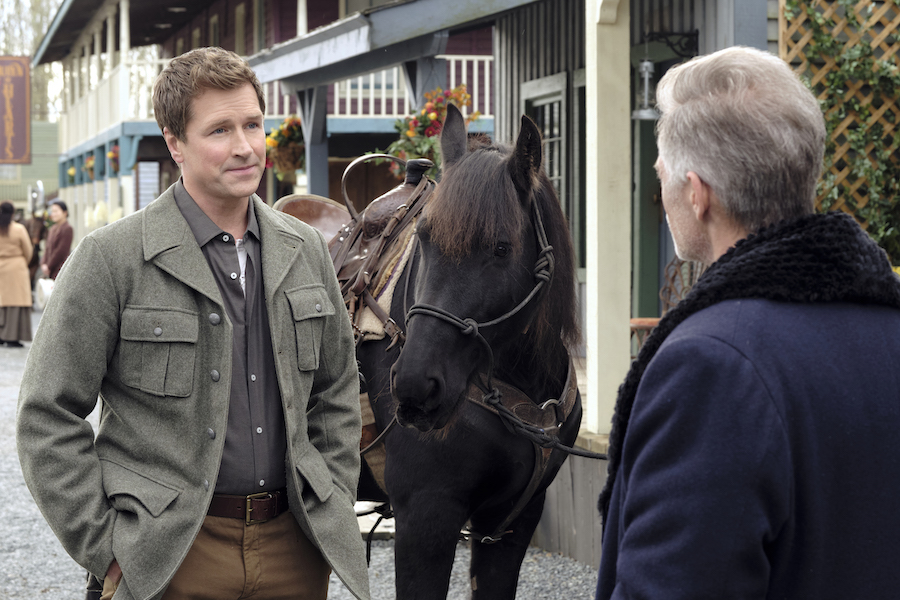 When Calls The Heart Season 8, Episode 11 promises to bring some very big changes to the people of Hope Valley. The penultimate episode is aptly titled, Changing Times.

What can Hearties expect?

The upcoming When Calls The Heart Season 8 episode promises a lot of “big changes.” The episode is entitled Changing Times. According to the Hallmark press release, “A visit to Hope Valley by Landis (Todd Thomson, Supernatural), the school inspector, causes trouble for Elizabeth.”

Thanks to some previews and exclusive peeks into the upcoming episodes, a whole lot more happens. One of those surprises is that Carson is ready to pop the question to Faith. However, the ring is missing. Moreover, Faith sees Carson doing some silly things in search of the lost ring.

Also, Rosemary is using all of her sleuthing skills to figure out a big, terrible Hope Valley mystery scam. To Lee’s chagrin, she is using her nosiness and curiosity to figure things out. Is she walking into a dangerous situation? Is Rosemary in over her head?

What other big changes could happen? In another plotline, the Hope Valley residents gather together to help find a lost resident.

However, Hearties know that sneak peeks only tell one small story. The show’s co-creator and executive producer Brian Bird promises something very emotional. On Saturday, Bird took to Twitter to write, “#Hearties… I just got a case of emotional whiplash. What the blankety-blank just happened??? Guess you’ll have to watch #WhenCallstheHeart tomorrow night, 9pm8/c, on @hallmarkchannel and @SCHeartHome.”

Hearties, this When Calls The Heart Season 8 Supersized season of 12 episodes will come to an end. The final episode is called The Kiss. Moreover, this is the episode that will show Elizabeth actually choosing her man. It may be safe to guess that there will be some big kisses. Also, someone is going to leave Hope Valley.

That means that this new episode, Big Changes could surely include some clues to the final episode! Who is leaving? The love triangle is finally, finally ending. Who is Elizabeth picking? Does she choose Mountie Nathan, or Saloon owner Lucas, the guy she has been “dating” all season?

#Hearties… I just got a case of emotional whiplash.
What the blankety-blank just happened???
Guess you'll have to watch #WhenCallstheHeart tomorrow night, 9pm8/c, on @hallmarkchannel and @SCHeartHome. pic.twitter.com/kpnzfb3ib6

All season, Hearties have had two questions the entire When Calls The Heart Season 8. The first is which eligible bachelor will Elizabeth choose. The second is if there will be a Season 9.

We are down to the final two episodes and neither of these questions has been answered. Hallmark has not officially announced When Calls The Heart Season 9. But, it is likely that Hallmark will announce this news in the next two weeks.

Be sure to catch the Season 8 When Calls The Heart penultimate episode entitled Changing Times, on Sunday, May 2, at 9 p.m. Eastern, on the Hallmark Channel.

‘Y&R Spoilers : Who Kidnapped Mariah Copeland And Where Is She?
Will There Be ‘When Calls The Heart’ 2021 Christmas Movie?
‘Sister Wives’ Fans Have A BIG Question For Meri Brown: Too Personal?
‘Bachelorette’ Fans Debate Blake’s NSFW Painting: Black Canvas Or ABC Censor?
‘Uncoupled’ On Netflix: Release Date, What We Know Right Now