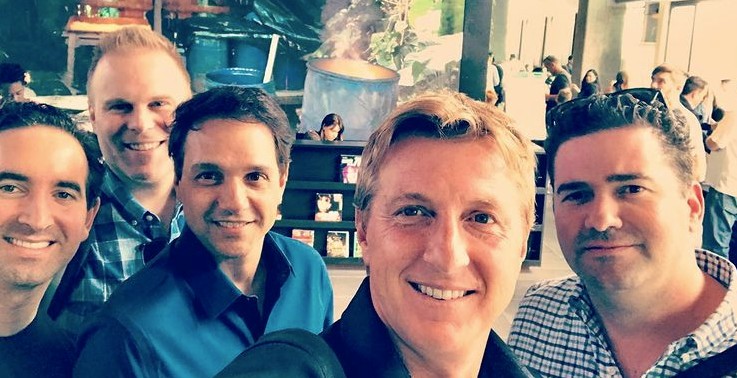 The cast of Cobra Kai is celebrating this week. Ralph Macchio announced they have wrapped filming for Season 4 of the hit Netflix series. What can fans expect and when can they expect to see it all play out on their televisions? Keep reading to find out about the much anticipated Season 4 of Cobra Kai.

Fans are more than excited to see what awaits them in Season 4 of Cobra Kai. The show’s co-creator and executive producer Jon Hurwitz announced they had finally wrapped Season 4. According to Heavy, Filming took roughly 3.5 months to capture everything for the anticipated upcoming season.

It was noted how difficult filming was during a pandemic. Cast and crew were thanked for their tireless efforts. Plus, Hurwitz said, this was their most ambitious season yet. It sounds like fans have a lot to look forward to.

Hurtwitz also tweeted out, “We’re going, going, back, back, to Cali, Cali! It was a challenge filming a season of TV during a pandemic, but our cast and crew waxed on, struck hard, and bit like eagles each and every day. The end result will be our most ambitious season yet! Can’t wait for you to see it!”

Ralph Macchio also commented on Season 4. He went to social media and shared a photo of some of the cast members. He said, “Three years ago today with the big three and Billy Z promoting the launch of @CobraKaiSeries and last week celebrating the wrap of #CobraKai Season 4 on @Netflix What a journey! Can’t wait to share the new season!!”

Three years ago today with the big three and Billy Z promoting the launch of @CobraKaiSeries and last week celebrating the wrap of #CobraKai Season 4 on @Netflix What a journey! Can’t wait to share the new season!! pic.twitter.com/dbLCqHImnu

When can fans expect to see the new season?

Netflix has yet to announce an official release date for Cobra Kai Season 4. However, many have weighed in and said it could be early 2022. However, originally, Hurwitz said, “I would imagine it would come out a year after season.” He was referring to when the season wrapped. Originally, filming was supposed to start in January. Since filming has wrapped it’s safe to assume production has started. Hopefully, fans will be given a more solid timeline of release soon. While everyone hopes for early 2022 it may be further into the year such as May.

Cobra Kai Season 3 Daniel LaRusso tried to save Robby as well as save his car dealership business. He also tried to help his daughter Samantha cope with her own arch-rival Tory Nichols. Plus he learned new secrets about Mr. Miyagi during a fateful trip to Okinawa.

Fans also saw many favorites return from the original Karate Kid movie, including Elisabeth Shue. Will any other surprises pop up in Season 4?