Derick Dillard has been pretty active on Twitter since his brother-in-law Josh Duggar was arrested. Josh was arrested on Thursday and was in court on Friday. He pleaded not guilty to having child sexual abuse images on his computer. The case is still ongoing, and he has a hearing on May 5. At this time, he’s in custody and will not be allowed to be around minors if he is released on bail.

Since the news broke, there have been questions about whether TLC will cancel Counting On. About Josh being arrested, the network made it clear that Josh isn’t on the family’s show anymore. He was originally on 19 Kids & Counting, but it was canceled it 2015 when news of Josh’s molestations broke.

On social media, many people are calling for the cancellation of Counting On following the allegations made against Josh. A petition is even going around, and it’s received lots of signatures. Derick is even engaging in conversations with those who are discussing the possible cancellation.

On Twitter, Derick has gone back and forth with some of those who are discussing the show and Josh’s actions. One user points out that Josh is “responsible for his actions, not his parents, siblings, anyone.”

Derick then disputes this, saying that 19 Kids & Counting was canceled due to Josh’s actions, but the whole thing had to do with the family as well. In his tweets, Derick seems to support the cancelation of the family’s shows. It seems that he thinks the shows should have been done with a while ago. He seems to hint that Jim Bob and Michelle had something to do with Josh’s previous actions.

In the past, Jill and Derick have both been outspoken about leaving the show. It’s unclear whether they quit or were fired. TLC says they fired them, while Jill and Derick say they quit. Either way, the couple often speaks poorly about TLC. 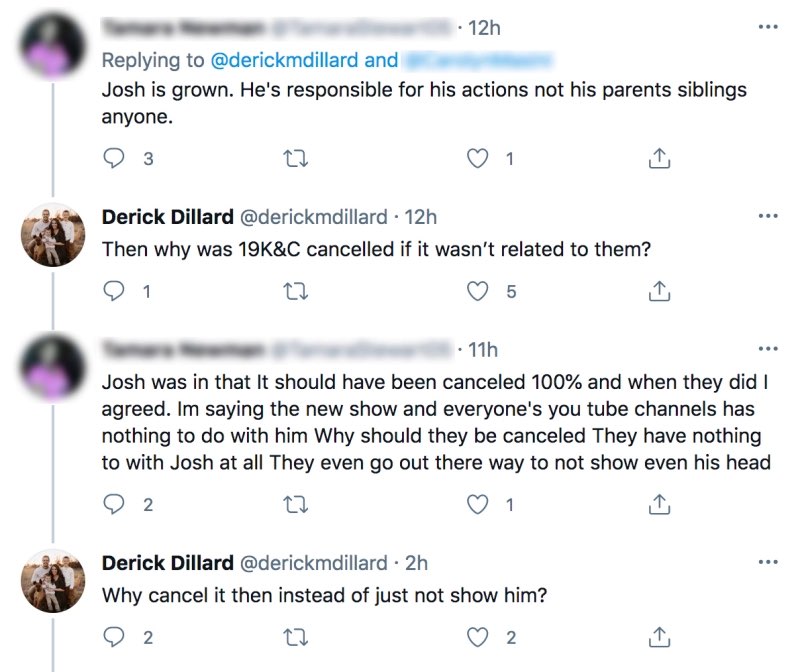 At this point, TLC hasn’t renewed or cancelled Counting On. The fate of the show may be affected by Josh’s recent actions, despite him not being on the show. With enough backlash, the network may have no choice but to cancel it.

So, what do you think of Derick Dillard’s recent tweets? Do you agree with him? Let us know in the comments below.

For more updates on the ongoing story about Josh Duggar, check back with TV Shows Ace.