Following Josh Duggar’s arrest on Thursday, members of his family have slowly begun sharing their responses to the news. As we previously reported, many of the family members chose to stay silent as the story unfolded. Now that the cause of his arrest has been revealed, the family is choosing to step forward and speak out. Jessa and Ben Seewald are the most recent to say something about Josh’s arrest.

On social media, both Ben and Jessa shared the same message about the ongoing situation. In the post on their Instagram stories, they included a simple text post without any pictures. The pair writes:

“We are saddened to hear of the charges against Josh. As Christians, we stand against any form of pornography or abuse and we desire for the truth to be exposed, whatever that may be. Our prayers are with their family as they walk through this difficult time.”

Since this was posted to the couple’s stories, it is only available to view for 24 hours. Additionally, there is no way for fans to publicly comment on their statement. Both Ben and Jessa have decided to turn off story replies on Instagram, which means their followers cannot even message them privately in response to their statement.

While some of the Duggars have limited the number of comments allowed on their Instagram posts, Jessa’s page remains the same. People can comment freely on her latest posts, though she hasn’t shared a main post about Josh. So, they may choose to comment on a photo of her kids. 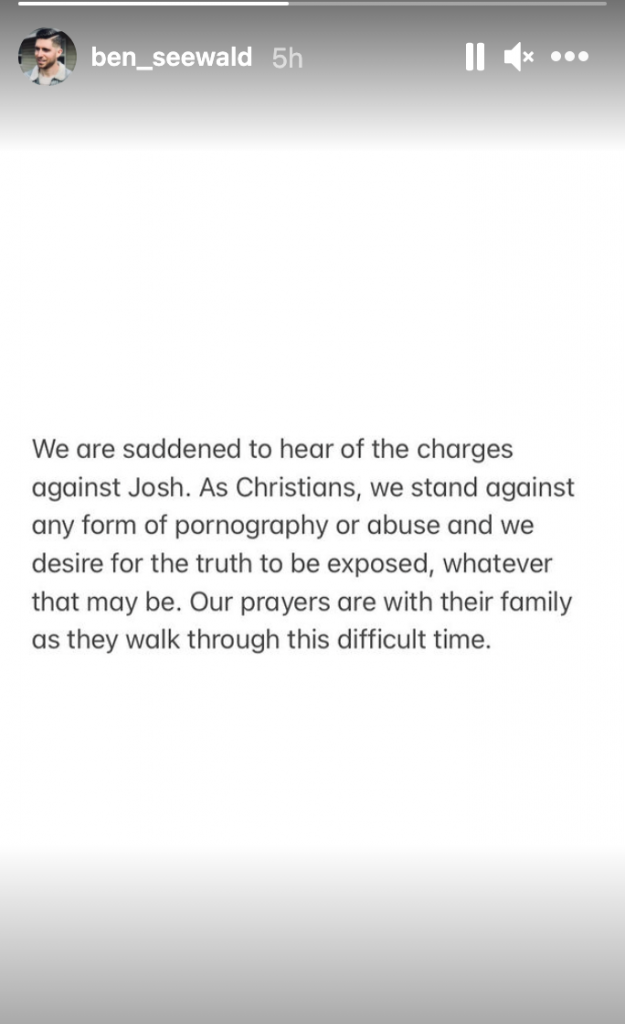 Jessa Seewald defended her brother in 2015

In 2015, Josh’s molestation scandal was made public. As a teen, he molested four of his sisters, including Jessa, and a babysitter. At the time, Jessa said, “I do want to speak up in his defense against people who are calling him a child molester or pedophile or a rapist, some people are saying. I’m like, ‘That is so overboard and a lie really.’ I mean, people get mad at me for saying that, but I can say this because I was one of the victims.”

It’s now been years since the molestation scandal happened and Jessa spoke out about it, so her views may have evolved. These are two separate issues as well, so her different responses make sense.

So, what do you think of Ben and Jessa Seewald’s comments about Josh Duggar’s arrest? Do you think she’s changed her mind since her initial statement in 2015? Let us know in the comments below.

For more information about Josh’s arrest and the ongoing story, check back with TV Shows Ace.