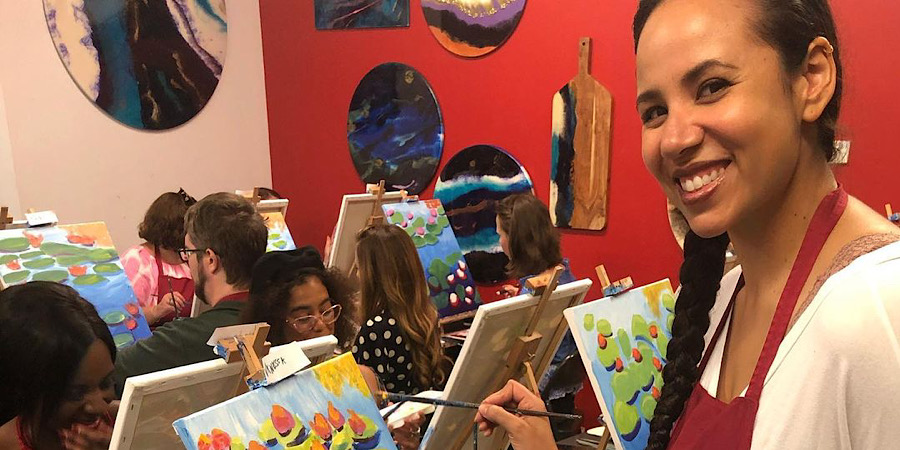 Vanessa Cobbs has broken her silence on the Dimitri and Ashley Snowden scandal. The ex-wife of the Seeking Sister Wife stars took to Instagram for a statement. Though she did not release a verbal statement, she posted a photo that spoke volumes. Just two days ago, the Snowdens were accused of domestic abuse by their latest sister wife, Christeline Petersen. She claimed they were both physically and verbally abusive towards her and. Petersen also said her children feared the Snowdens. Additionally, Petersen sought and obtained a temporary restraining order against Dimitri. She tried to get one against his wife, Ashley, as well. Ultimately, the restraining order and all charges were dropped yesterday.

Fans watched Dimitri and Ashley court a single woman, Vanessa Cobbs during Season 2. Eventually, she moved with them to California and they proposed with an engagement bracelet. Despite hesitation from her family, they celebrated with a wedding celebration in the finale. Sadly, she departed the family after the tell-all. Cobbs claimed it just was not the right fit for her.

When Season 3 began to air, the Snowdens claimed Vanessa broke up with them via text. They added she brought family with her when she returned to gather her belongings. Cobbs has never spoken publicly about how she left the family or her true reasons for why it was not a fit.

The Snowdens also returned to the series with two new potential sister wives. Tayler Monique is a single woman from Georgia while Christeline is a single mother from South Africa. Dimitri and Ashley immediately connected with Chrissy yet Tayler moved in first. It appears she has since left the family but she immediately sent love to Christeline after news broke about the restraining order. She shared a photo of the two of them in her Instagram stories with a sweet message. Now, Vanessa is having her say.

Earlier today, Vanessa made her first Instagram post since mid-April. Cobbs drew a purple heart on her hand and tagged a purple heart emoji in the post. Purple is the color used to stand up against domestic violence. According to Rose M. Garrity, president of the National Coalition Against Domestic Violence (NCADV): “Battered women chose purple as an evolution of the lavender from decades past. It’s seen as a color of royalty and is already associated with females anyway. As the battered women’s movement grew, we designated October as DV awareness month where we shine a purple light to show support of DV survivors.”

The judge dropped the restraining order and charges against Dimitri. There was not enough burden of proof on Christeline’s side to uphold it. She alleged he liked to choke her when they were intimate. Christeline claimed it would become violent and he would persist if she resisted. However, Dimitri showed texts from Chrissy saying she liked it. Dimitri has also posted he has had some struggles with mental health from a rough upbringing.

A lot is going on in this whole situation but Vanessa’s post cannot be ignored. Many started to question if domestic abuse could be why Cobbs left in the first place. Whatever the reason, it is nice to see her coming out in support of Christeline. In support of all women who are in abusive situations and are afraid to speak up. What do you think of Vanessa’s post? Do you think she is sending a message about why she left or in support of Christeline? Do not miss Seeking Sister Wife Mondays on TLC and discovery+.