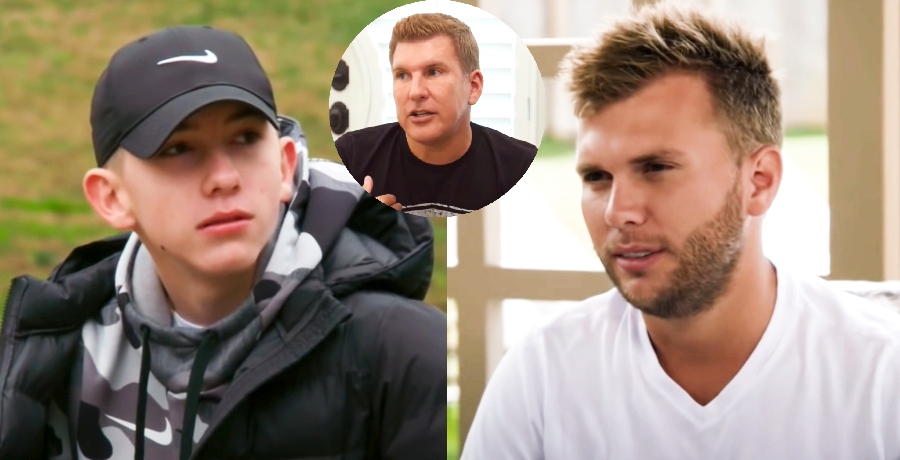 Chrisley Knows Best fans know that without a doubt that Todd Chrisley is very passionate about his children. It doesn’t take much to rile this father of six up.  However, this most recent incident is more than warranted. Todd and Julie Chrisley share all of the details on the latest episode of their podcast, Chrisley Confessions. Keep reading to find out more about the Chrisley children’s professional endeavors and why Todd Chrisley had to give someone on Chase’s Instagram a piece of his mind. Todd also shares some news about what Grayson is up to these days. Keep reading to find out more about Chase and Grayson’s professional on-takings.

Chrisley Knows Best Todd Chrisley praises his sons, Chase and Grayson after an internet troll says something disturbing to Chase

While Todd loves to sing his children’s praises, this update comes on the heels of Todd having to defend his children from an internet troll. Notably, this whole topic of conversation came about because someone sent some not-so-nice things to Chase’s Instagram. Rightfully so, Todd goes all papa bear. The gist of the original Instagram message is that Todd’s kids would’nt have what they have if it wasn’t for Todd.

“I don’t think that people understand that these kids work every single day of their life except Sunday,” explains Todd. Next, Todd goes on to give some insight into the kid’s schedule. He shares that they work four days a week filming a show, and the other two days they work on their individual projects. However, it isn’t that simple. On the days that they’re filming, they’re also working on their individual projects.

Todd goes on to confirm that he and Julie don’t have any involvement in the children’s individual projects. “These are things that they chose to do,” says Todd to the point that he didn’t make his children take on these projects. As far as these projects go, Chase is continuing to grow his candle brand. Grayson, at only 14-years-old, is working on a clothing line. As previously reported, Savannah has a make-up line, a fragrance line, and a hair care line all coming out in the next couple of months.

Todd lets people know that when they say things like the children wouldn’t have what they have if it wasn’t for him, they’re talking to adults. However, these adults are Todd and Julie’s children. Ultimately, Todd shares, “You don’t phase them. You phase me as a parent.” Elaborating on that he says, “You don’t phase my children because they know who they belong to in the end. And they know who God entrusted them with.” Heartwarmingly, he also says, “Between God, Todd, and Julie they have all they need.”

How do you feel about how Todd Chrisley sticks up for his children? Let us know in the comment section below. Come back to TV Shows Ace for more Chrisley Knows Best news.

YOWZA! Danielle Busby KILLS In Revealing Electric Blue Bikini: Photo
Paris Hilton Joining ‘RHOBH’ Would Be ‘Hunky Dory’ With Fans, But Will She? Kathy Spills All
Love In The Afternoon With Hallmark’s ‘A Little Daytime Drama’
‘The Young and the Restless’ Spoilers, August 2-6: Phyllis Gets Everything She Needs
‘Love Island USA’: Does Jeremy Hershberg’s Dad Have Ties To CBS?!