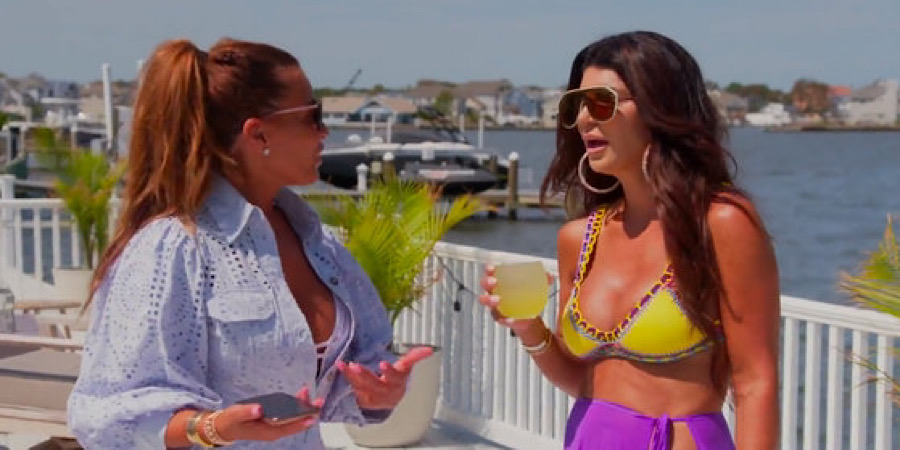 Last week on RHONJ, Jennifer revealed Margaret’s husband heard the rumor about Evan cheating. He shared this info at guy’s night. Jen’s husband, Bill went and told Jennifer, who has a big mouth. This gave Teresa extra ammo in her argument. She and Jackie had not seen each other in weeks but were reunited at Dolores’s shore house dinner. Teresa brought up that Joe B. heard the rumor, too. This set Margaret off and she flipped on her husband who denied saying anything. The guys stood behind him and Teresa had the ladies back up her character. Melissa reminded her of the time she called her a stripper. Margaret brought up when she had her hair pulled. Jackie wanted to let it go but Teresa couldn’t. So, Jackie replied with a prison comment. That led to this episode.

RHONJ Meltdown At The Jersey Shore

Teresa flipped out when Jackie brought up her going to jail. But, Joe Gorga was fuming over the fact Teresa wanted everyone to lay off her now ex-husband. For years, he was absolutely horrible to her and her brother. He does not care how easy he made the divorce. In Joe G.’s eyes, this was owed to Teresa after he put her in jail. Melissa started screaming at Teresa because she never truly takes accountability for her actions. She threw a cheese bowl at her. Which was promptly cleaned up.

Her husband went in on Teresa right after siding with his wife. Joe Giudice wrecked their family and put their mother in an early grave. He cannot forgive the lies he continues to spread about him and how Teresa was always so silent. It was clear Joe G. had enough and was not going to take it anymore. Dolores intervened and reminded them they were family. After that, Melissa, Teresa, and Joe hugged it and he pleaded with her to drop it all with Jackie. It was not worth it.

Those staying at Melissa’s shore home left and went home with her. Immediately Jackie called Evan who was coming up the next day. She had to let him know what happened at dinner and he was livid. As a result, he is coming in guns blazing. It seems nothing will be settled at Melissa’s pool day.

The next morning, everyone is getting ready to head to Melissa’s for her pool day. Joe G. is cooking up a storm outside on the grill and it’s already a good time. However, there are two things looming: Evan is on his way and Teresa needs to rectify this whole mess. She is pampering herself in the mirror and prepping what she could say to make it right. This is a very special weekend as it is a memorial for Teresa and Joe’s late father. All of the kids will be joining them so there should be peace and no bad blood.

Bill arrives to be with Jen and she takes him to their room at Dolores’ home to share what has gone on. She also shows him the intimate gift Teresa gifted them all with the last episode. Teresa and her ex-husband have gone into the intimate pleasures business. It is weird they have a joint venture but if it works for them. Jen also shared what happened when the Evan situation came up. Bill realized he should not have told her what Joe B. said but she reminded him they have no secrets.

At Melissa’s, everyone is starting to lounge by the pool when Teresa makes her arrival. She does go up to Jackie and says she is sorry, in her own way. However, she does not want to apologize to Evan directly. She claims she feels uncomfortable talking to him. Dolores feels that comes from dealing with her ex. Jackie says they can talk to him together as he is on his way. Will that still hold up?

Evan Arrives On RHONJ and Jennifer Clashes With Margaret

Everyone is happy that Jackie and Teresa can have a peaceful existence and they can enjoy the day. Evan eventually shows up and he is now face-to-face with Teresa. She does apologize but Margaret does not think it is enough. For Teresa, it is a big deal. Everyone heads out to the water and they have a great time. It is so easy to let everything go- until they get back on land.

The food they have ordered arrives and as they are eating, Jen brings up how Margaret lashed out at her husband, Joe the night prior. She felt it was embarrassing but Margaret reminds her it happened because of something she said. Joe Gorga immediately grabs the guys and their food and they head to another table. He can not handle another conflict. The two start going at it and Margaret calls Jen a sloppy drunk after the incident at Teresa’s pool party. Jen turns around and brings up something Margaret told the ladies in confidence.

She mentions how Margaret slept with her much older boss when she was a young girl. Margaret is done, calls Jen’s meal ticket, and goes inside followed by Melissa and Jackie. Dolores says Jennifer is like the kid who repeats stuff you don’t want her to. They still have a dinner to be had and as everyone exits Melissa’s, Jen is still going on and on.

Still to come: Teresa’s new boyfriend is revealed while Melissa and Joe have cracks in their marriage. Catch RHONJ Wednesday nights at 9 pm only on Bravo.