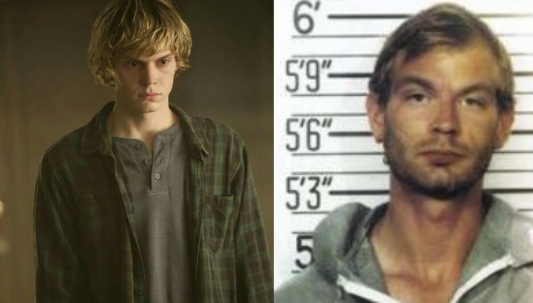 If you were a fan of Evan Peters during his many seasons on FX’s twisted series, American Horror Story, buckle up. Evans is no stranger to playing demented, tormented and downright-evil characters, and his next role lands right in his wheel-house.

This series is getting hype for creating a new experience for viewers – even if they have heard the story before. ‘Monster’ details some of Dahmer’s most gruesome acts, but does so through the eyes of his victims. This format allows viewers to be a part of the experience, getting to see and ‘feel’ what the victims went through before their untimely demise.

TV Line reports that in addition to taking the victims’ perspective, the series will also explore the “police incompetence and apathy” that basically enabled Dahmer’s several year-long killing sprees to take place. Not only does the show catalog the horrific murders, but it also lets the viewers in on the fact the many ways the authorities failed the victims. Time and time again, police would have Dahmer in their grasp, just to let him go.

While Peters is certainly no stranger playing less than savory characters, Dahmer is certainly a new level of deviant for the 34-year old AHS alum. Considered one of the most notorious serial killers in American history, Jeffrey Dahmer was charged with 17 murders and found guilty of 16.  In ’92 He was sentenced to 16 life sentences in a high-security prison, however, he would be relieved of his term when he died gruesomely at the hands of a fellow inmate in 1994. He served two years.

During the course of his murderous rampage, Jeffrey Dahmer would rape, murder, and subsequently dismember 17 people. His victims were male ranging in age from 14 to 33. People reports that in addition to the murders, Dahmer was also charged with various other heinous crimes including but not limited to necrophilia and cannibalism.  Tasty, huh?

According to police accounts, when Dahmer’s apartment was inspected, what authorities found were the things nightmares are made of. History Channel recounts the events, reporting that authorities found dismembered body parts throughout the home. Dahmer’s fridge/freezer contained several human heads. Drums of chemicals that held decomposing victims sat in the corner of his bedroom. Dahmer even had his own home-decor theme, choosing to make desk ornaments out of human skulls.

Evan Peters Teams Up With An Old Friend

Monster: The Jeffrey Dahmer Story, pairs up Evan Peters with an old friend, co-creator of the American Horror Story series, Ryan Murphy. This project will also feature the collaborative efforts of Murphy and longtime friend and writing partner, Ian Brennan. These two have worked on numerous film and television projects together in the past including, Ratched, The Politician, and Hollywood. All three were Netflix original productions.

ET Canada reports that David McMillian will be signing on to serve as supervising producer. Janet Mock and Carl Franklin will direct several episodes, including the pilot.

As far as casting is concerned, Richard Jenkins, best known for his role in Six Feet Under, will play Dahmer’s father. The cast list also includes Penelope Miller who is will portray Evan’s on-screen mother.

When will Monster Be Available to Stream on Netflix?

Netflix has not indicated a release date for the series. Newsweek reports that Evan Peters recently wrapped filming for his HBO program, Mare of Easttown. Barring other issues, the series could start filming by year’s end.

Are you as excited as we are? Stay tuned to TV SHOWS ACE for the latest updates on this and other upcoming Netflix Originals.