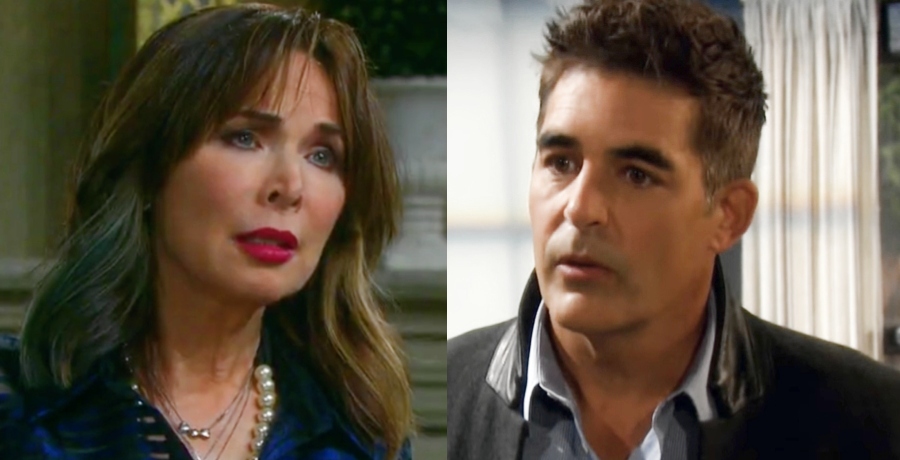 DOOL spoilers reveal Rafe Hernandez (Galen Gering) has another suspect on his radar for the murder of Charlie Dale (Mike Manning). Of course, that doesn’t completely rule out his first suspect of Sam Brady (Alison Sweeney).

It does, however, cause Salem’s top cop to broaden his investigation. With new information surfacing, Kate Roberts (Lauren Koslow) is now in the hot seat on the NBC soap.

Days of Our Lives spoilers confirm Rafe Hernadez has a new suspect in the murder of accused rapist Charlie Dale. Sami Brady was the prime suspect. After all, she was found on the scene with the murder weapon in her hands. Further forensic evidence showed her clothes have gun residue on them. Of course, this is circumstantial, but also enough to make a case against her.

New Days of Our Lives spoilers show Rafe Hernandez receives additional forensic reports. Now, his investigation takes a turn as he has a few pressing questions for Kate Roberts. The gun that killed Charlie Dale belongs to Kate Roberts. So, of course, Rafe needs to grill his ex-lover and Allie Horton’s (Lindsay Arnold) grandmother about her whereabouts that night. Kate Roberts now tops the list of suspects.

Kate Roberts is blindsided when Rafe Hernandez corners her on Days of Our Lives. The latest forensic report clearly identifies the gun used to kill Charlie Dale is registered to her. Of course, she’ll need to give Rafe an alibi. Since Kate is with Jake DiMera (Brandon Barash) when Rafe presses her on the details, DOOL spoilers hint Jake will step up as Kate’s alibi.

Rafe’s not too stunned Jake is with Kate Roberts and stands up as her alibi. After all, his sister no doubt talked his head off about this situation. However, Days of Our Lives spoilers hint Jake DiMera isn’t the most credible of witnesses. Recall, he has quite a shady past with the mob and connections to the Vitali family’s “business” back in Philadephia.

In the latest #DAYS, Kate and Jake get a win over Philip and Gabi. https://t.co/ZsCmioRrzb pic.twitter.com/KJzKUI476c

DOOL spoilers predict it’s only a matter of time before Rafe finally turns his attention to Allie Horton as the one who shot and killed her attacker Charlie Dale. If, indeed, the gun used belonged to Kate, as forensics confirmed, it makes sense that Allie shot the gun. Recall, she swiped Kate’s gun before and used it to threaten Tripp Dalton (Lucas Adams).
Days of Our Lives spoilers show Allie’s acting wonky over Charlie’s death. Sami clearly believes Allie shot Charlie. Why else would she not come clean right away? With Kate’s gun as the weapon, it opens Rafe’s list of suspects to include people who would have access to her gun.
That would be both Allie Horton and Kate’s son (and Allie’s dad) Lucas Horton (Bryan Datillo). Let’s not forget Lucas had spent time in person for shooting EJ DiMera (James Scott) when in fact, his son Will Horton (Chandler Massey) was the shooter. So Sami’s either covering for Allie or Lucas on the NBC soap,

Heather Locklear To Star In ‘Don’t Sweat The Small Stuff’ Lifetime Movie
Could Hallmark’s ‘Good Witch’ Continue With Movies?
‘Y&R Spoilers : Who Kidnapped Mariah Copeland And Where Is She?
‘When Calls The Heart’ Season 9 Has Started Filming: All The Details
Double Lock Your Doors & Watch Lifetime’s ‘Next Door Nightmare’