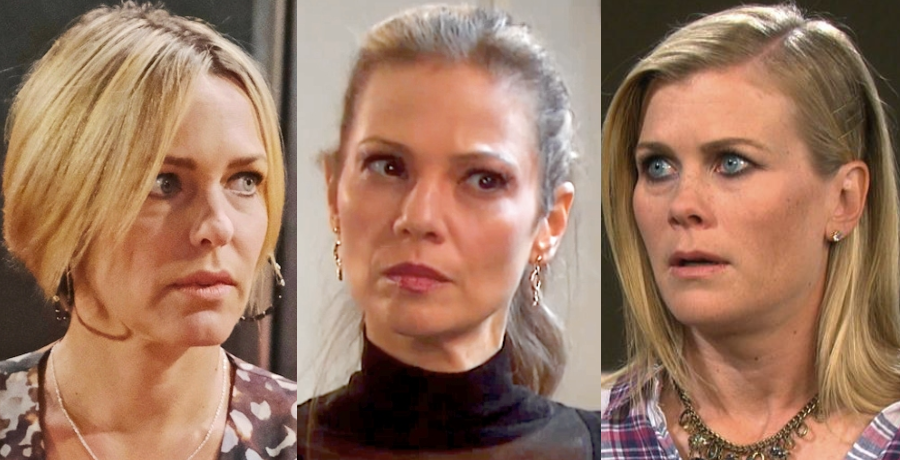 Days of Our Lives spoilers two weeks ahead from Monday, March 15, to Friday, March 26, show Nicole Walker (Arianne Zucker) starts to get suspicious of  Ava Vitali (Tamara Braun). Plus, Sami Brady (Alison Sweeney) is beginning to feel there’s no way out of her current situation.

Also, Rex Brady (Kyle Lowder) has some news for his parents and unwittingly becomes a pawn in Kristen DiMera’s (Stacy Haiduk) twisted schemes soon on the NBC Soap.

Days of Our Lives spoilers reveal Xandr Cook (Paul Telfer ) and Sarah Horton’s (Linsey Godfrey) wedding will be a non-starter. Kristen DiMera’s stashed the bride after she figured out “Susan” was Kristen. Now Kristen takes her plans to a diabolical level.

Days of Our Lives spoilers show Kristen sports a “Sarah” mask and impersonates the hot doctor. Not only does “Sarah” ditch Xander at the altar, but she also accepts a date with her ex-fiance Rex Brady. Then they hit the sheets while Kristen arranges for Xander to find “Sarah” in bed with Rex. Certainly, Xander’s devasted. Kristen has once again gone too far in her obsession to keep Brady Black (Eric Martsolf) as her man.

Days of Our Lives spoilers say Rex Brady didn’t come to town with plans to implode Xander and Sarah’s relationship. However, that is certainly what he’s doing. First, he crashes Xandr’s bachelor party. After a chat with Chloe Lane (Nadia Bjorlin) and Bardy Black, he is convinced he needs to tell Sarah he’s still in love with her. Of course, he ultimately gets hoodwinked by Kristen DiMera as she impersonates Sarah.

However, Rex Bady is in Salem to share some big news with his parents Roman Brady (Josh Taylor) and Kate Roberts ( Lauren Koslow). Perhaps Rex is taking a job at Salem University Hospital and making Salem his home permanently?

Abigail Deveraux Unhinged On Days Of Our Lives – Back To Bayview?

Days of Our Lives spoilers say Chad DiMera (Billy Flynn) believes his wife, Abigail Deveraux (Marci Miller), has gone too far in her quest to get revenge on her sister Gwen Rizczech (Emily O’Brien).  Of course, Abby’s dad Jack Deveraux (Matthew Ashford), isn’t pleased when he learns what Abbyy did to Gwen.

So the two men in Abby’s life start comparing notes. Both certainly feel she’s headed towards a mental breakdown. Chad thinks things are way out of hand when it comes to Gwen. Abigail Deveraux’s portrayer, Marci Miller, is expecting her first child any day now. Since her real-life pregnancy wasn’t written into the script, look for Abby to make a hasty exit,  likely to Bayview,  for in-patient treatment in the very immediate future.

Days of Our Lives spoilers suggest Nicole Waker is starting to doubt her bestie, Ava Vitali. Nicole used her influence on Rafe Hernandez (Galen Gering) to persuade him to let Ava move into his house. However, now that Charlie is dead, the threat died with him. So why is Ava still bunking up at Rafe’s house? Of course, Nicole is starting to get jealous of the time Ava and Rafe are spending together.

Additional Days of Our Lives spoilers suggest Nicole has suspicions that Ava is the one that shot Charlie. Nicole isn’t the only one who suspects Ava. Rafe’s sister Gabi Hernandez (Camila Banus) questions Ava about the night Charlie was killed, much to Ava’s dismay.

Ava’s timelines and mysterious behavior are not lining up. Nicole Walker was once an investigative reporter, now her instincts are leading her down the path of doubt regarding Ava’s innocence.

DOOL Spoilers: Sami Brady Trapped By Her Own Lies

Days of Our Lives spoilers indicate Sami Brady has backed herself into a corner. It’s obvious she didn’t shoot Charlie. Also, it’s obvious she isn’t sad he’s dead. And, of course, there’s a case that can be made to prove she did off the man who raped her daughter. However, Sami, no doubt walked into the aftermath of a crime she believed her daughter Allie Horton (Lindsay Arnold) committed.

Now Rafe Hernandez has a second suspect in for questioning. Days of Our Lives spoilers reveal Sami makes a huge confession to Lucas Horton (Bryan Datillo). Likely, she confides in him that she thinks their daughter is responsible for the murder. Also, she knows she’s so far deep into the lies that she’s trapped and likely might be the one ultimately serving time for the crime on the NBC soap.