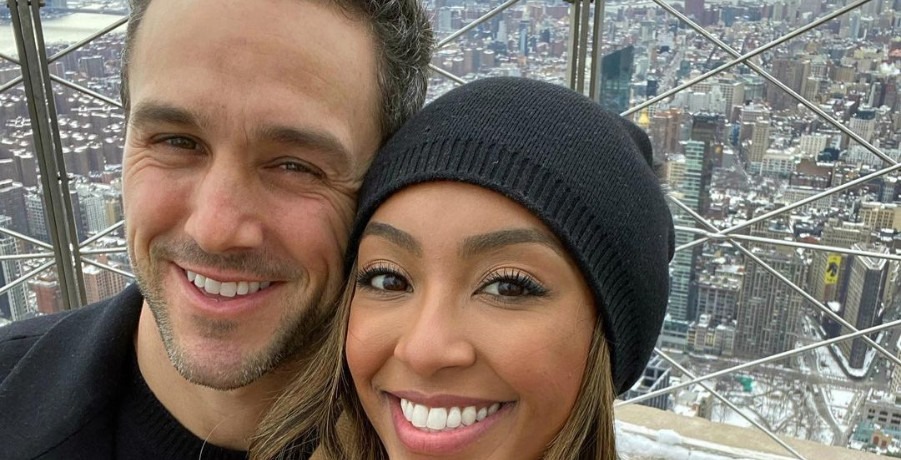 While Matt James is still on his journey in currently airing episodes, Tayshia Adams ended hers almost two months ago. Zac Clark and Tayshia ended up engaged and very much in love as they continue to be.

Tayshia keeps busy by training for marathons and co-hosting the podcast Click Bait with Bachelor Nation. Of course, fans are anxious to know about her wedding plans with Zac. Talking to ET Canada, Tayshia talked a bit about when that wedding might be. She also answered if she would be willing to let it be televised.

In a recent post to her Instagram for Valentine’s Day she shared a picture of the two of them at the Empire State Building. It was captioned, “feelin on top of the world with you! Happy Valentines Babe!” Fans and Bachelor nation showed their love for the couple on the post. One fan said, “these are the vibes we need today. Love you both, best season ever, best couple ever.”

When Does Tayshia Adams Want To Get Married?

Both Tayshia Adams and Zac Clark were married before. That’s why they were on the same page about not rushing it. She said, “I officially decided it’s going to be between either the months of April to July because all the other months are taken.” As far as when she said it could still be a year out.

Zac doesn’t know what he got himself into. According to ET Canada she said, “I’m excited to start wedding planning. I love all of that. I love décor.” Adams said she liked being creative and finding things other people hadn’t before. She also opened up about whether or not she’d let the wedding be filmed. As some Bachelor couples including the first big one Trista and Ryan Sutter and BIP couples like Carly Waddell and Evan Bass have tied the knot on television, they would be in good company.

Will The Couple Invite Bachelor Nation To The Wedding?

Tayshia Adams said at first she didn’t want to let cameras be present for the wedding. She said they wanted something just for them after having such a public relationship. Then they decided, “the outpouring of love we have gotten and the support is insane.” That leads her to want to share some of it with all.

She also talked about the behavior of Matt James’ contestants. Adams said at some points, she had to walk away. She thought the drama dominated too much and it didn’t make her happy. Tayshia said Matt was great and she hopes he forms great relationships. She said she wants to see who Matt ends up with at the end.

Do you want to see Tayshia’s wedding televised? What colors do you think she’ll choose for the event? Comment with your thoughts down below.