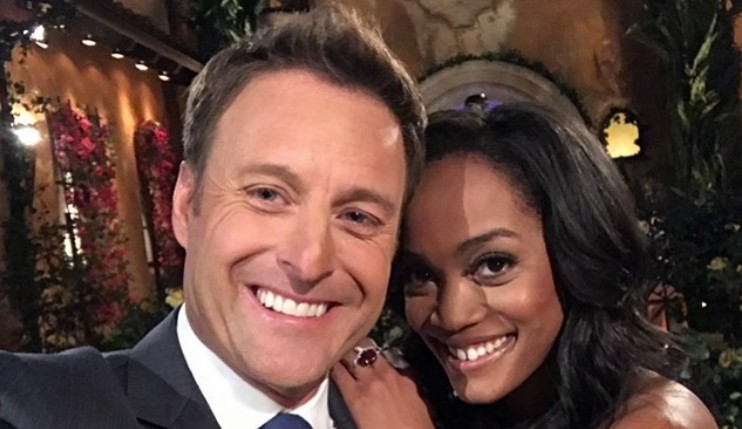 Bachelor Nation has been waiting to hear from host Chris Harrison after his conversation with Rachel Lindsay sent the franchise into controversy. Today, Chris appeared on Good Morning America. He was interviewed by Michael Strahan regarding his comments defending Matt James front-runner, Rachael Kirkconnell. He also addressed his future with the show and the treatment the world has been bestowing upon Rachel Lindsay.

Good Morning America featured Chris Harrison Thursday morning. While Chris has spoke out and apologized on social media, this is his first actual interview since his Extra appearance with Rachel Lindsay. He said, “I am an imperfect man, I made a mistake and I own that.” Chris continued, “I believe that mistake doesn’t reflect who I am or what I stand for. I am committed to progress, not just for myself, also for the franchise. And this is a franchise that has been a part of my life for the better part of 20 years and I love it.”

Chris is also appalled by the treatment the public has been showing Rachel Lindsay. He told Michael he has not spoken to Rachel since she deactivated her Instagram account. However, prior to that, he did speak to her and apologized. And, he said he plans on doing that again.

He went on to say, “I am saddened and shocked at how insensitive I was in that interview with Rachel Lindsay. I can’t believe I didn’t speak against antebellum parties, what they stand for.” Chris continued, “I didn’t say it then and I want to say it now: those parties are not OK, past, present, future. And I didn’t speak from my heart. And that is to say that I stand against all forms of racism, and I am deeply sorry to Rachel Lindsay and to the Black community.”

He also pleaded with the public to be kind to her. He said she did nothing wrong. Chris pleaded with fans saying, “To anyone who is throwing hate towards Rachel Lindsay, please stop. It’s unacceptable.”

The comments that landed him in hot water

What actually landed Chris Harrison in hot water? He seemingly defended Rachael Kirkconnell when photos of her surfaced on social media attending an Old South Antebellum-themed party in 2018. Chris said the public should show her some grace until she can speak out about the incident. When asked if it was a good look from Rachel Lindsay  he said, “Well, Rachel, is it a good look in 2018 or is it not a good look in 2021? Because there’s a big difference.”

Rachel replied, “It’s not a good look ever because she’s celebrating the Old South. If I went to that party, what would I represent at that party?”

Today, Strahan asked Chris if he still stands by those statements and believes there is a difference because of the year. He said, “There is not. Antebellum parties are not OK. Past, present, future, knowing what that represents is unacceptable.”

How Chris Harrison is moving forward

Chris said he continues seeking help for education not only for himself but also for the franchise. He said, “I sought out leading scholars, teachers, faith leaders, people like Dr. Michael Eric Dyson, who I am so grateful for, and I’ve also been working closely with a race educator and strategist. I thank them all.” He continued, “But Dr. Dyson often talks to me about council. Not cancel, and that is full accountability, understanding what you didn’t understand, owning that, learning from that, seeking counsel often in the community that you hurt, learning from them, listening, gaining experience, knowledge and moving forward.”

Chris also expressed his desire to return as host of The Bachelor. He plans to be back and believes the franchise can be an “important beacon of change.”

Chris wrapped up his interview by saying, “This interview is not the finish line. There is much more work to be done. And I am excited to be a part of that change.”

After the interview wrapped, Strahan seemed to question whether Chris was just wanting to keep his job or is really advocating for change. There have also been rumors Strahan could step in as a replacement host for Chris.

Time will tell. Many fans hope to see Chris return saying the show just wouldn’t be the same without him.