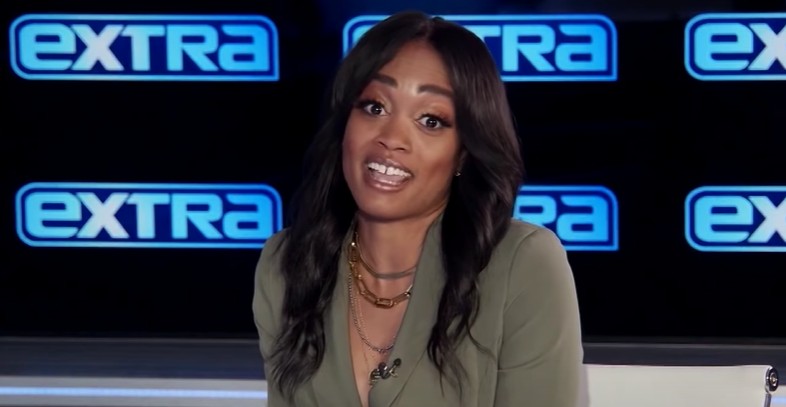 The Bachelor host Chris Harrison finally spoke publicly on television Thursday morning. He appeared on Good Morning America following his decision to step aside from the franchise. During his interview with Michael Strahan the controversy surrounding Rachel Lindsay and Rachael Kirkconnell was discussed. Following the interview, Rachel spoke out about her thoughts on the interview. She also addressed whether or not she’d accept his apology.

People shared all about Rachel Lindsay’s comments following Chris Harrison’s interview. During the interview, Chris apologized to Rachel on television. He also apologized to the Black community he offended with his words and defense of Rachael Kirkconnell. Chris said he had spoken to Rachel after their initial interview and apologized. He admitted he had not spoken to her since she deactivated her Instagram account.

Rachel went on to say, “And for me, for us to move forward, I need to accept the apology, so we can all be better from this situation, which is what we want.”

She also said, “I wasn’t expecting him, you know to address what’s been going on with me because this is the first time we’ve heard from Chris, but the fact that he did address the harassment and the hate that I’ve been receiving, I really appreciate that.”

"We can all be better from this situation." Rachel Lindsay reacts to Chris Harrison's latest apology and addresses how we move forward. https://t.co/Ur5J4qELDa#TheBachelor #BachelorNation pic.twitter.com/M7JsElZZCz

Rachel also said it’s important for people to continue having tough and uncomfortable conversations. She said, “Isn’t that what this should be as well? It’s bigger than just The Bachelor, it’s bigger than just a reality TV show. There are a lot of issues that have come up because of this interview, and I think it’s important that we continue the conversation, we continue to move forward. That’s the best thing that we can hope for out of all of this.”

Earlier this week, Rachel said she believed the franchise should stop filming until the controversy came to a conclusion. She pointed out how production for The Bachelorette would be starting soon, yet nothing has been solved.

After calling out the franchise for not speaking out regarding the racism controversy, they did. Executive Producers issued a statement supporting Rachel Lindsay. They asked fans to stop being hateful towards her. Many were upset it took producers so long to comment.

As for Chris Harrison’s future with the franchise, it remains up in the air. Chris said he wants to and plans to return to the franchise. It remains unknown if Chris will be returning to host the upcoming season of The Bachelorette.

There have been other names mentioned as possible contenders to host the show for a period of time. One name, in particular, is Michael Strahan.