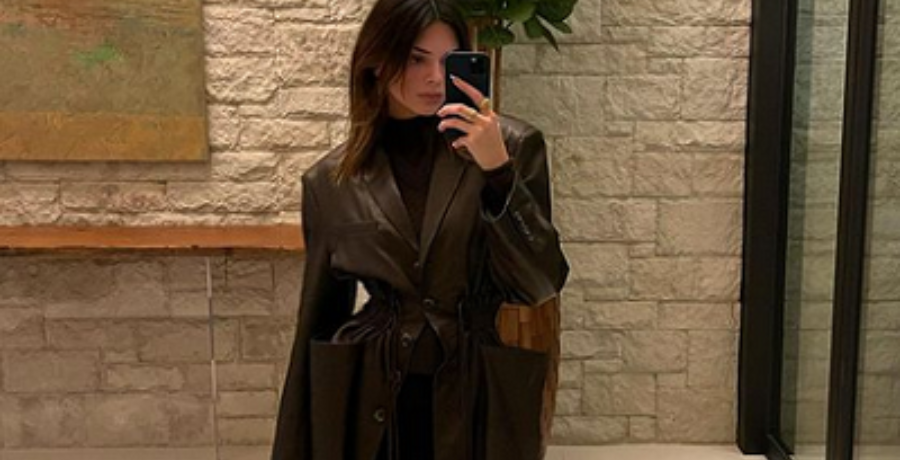 Kendall Jenner is no stranger to posting bikini photos. She loves showing off her incredible body. But she caused a stir on social media. Yesterday, TV Shows Ace reported that the KUWTK star shared behind-the-scenes footage of her red hot Skims photoshoot with her sisters, Kendall and Kylie Jenner.

All three sisters wore matching red bikinis. But it was Kendall that everyone had their eye on. They couldn’t help but notice her in Kim’s Instagram Stories. While most of the comments were positive, some think Kendall’s viral photo was harmful to young women.

Kendall Jenner went viral. Her name started trending on Twitter after Kim Kardashian shared photos from their upcoming photoshoot for Skims. Kendall also posted photos on her respective Instagram account. Some fans posted on Twitter that they felt insecure after seeing Kendall’s photos.

“I got 99 problems and looking like Kendall Jenner would solve all of them,” one fan wrote.

The reality star noticed the comment. She revealed that she too suffers from body insecurity.

“i am an extremely lucky girl. appreciative of all that i have,” Kendall tweeted. “but i want you to know i have bad days too and that i hear you! you are beautiful just the way you are!!! it’s not always as perfect as it may seem.”

She has spoken out about her insecurities before. In an interview with The Telegraph, Kendall admitted to comparing herself to her famous sisters.

“My sisters are a lot curvier than me,” she told the British outlet. “They have boobs, and I don’t have boobs. Growing up being this little twiggy girl, I saw my sisters and always thought ‘Oh no, am I supposed to be more sexy like them?’ I almost felt like I didn’t fit in for a part of my life.”

She eventually got over those insecurities. Since then, Kendall has accepted that she and her sisters are different. Not only do they have different bodies, but they also have strikingly different personalities. The Keeping Up With the Kardashians star rocks her own vibe and interests.

But that’s not all. Kendall Jenner got slammed for promoting unrealistic body standards. Some fans claimed that she Photoshopped the bikini photos. One user named @problematicfame took to her Instagram page to share the photos of Kendall in the red bikini.

“also.. this photo is very photoshopped,” the user wrote. ‘kendall is obviously very gorgeous but these are not her real proportions, nor are they anybody’s. please don’t compare yourself to heavily edited images. even kendall doesn’t even look like irl. [sic]”

Kendall Jenner is being called out for promoting unrealistic body standards with photoshopped photos of her body. pic.twitter.com/V0BTKs4JFa

The fan followed up with some examples. She claimed while the model was posing, some of the images were heavily edited. According to the Instagram user, not everything that people see is for real. She also had some encouraging words for young fans.

“Anybody who has a uterus has a little ‘pooch’ that’s a fact (that’s your uterus!) flat stomachs just aren’t possible, our bodies aren’t built to look that way,” she continued. “Now make sure you’re drinking water and go eat that burger or that pasta! It’ll be delicious and you deserve it. [sic]”

What are your thoughts on Kendall’s bikini photo? Do you think it encourages an unrealistic body standard? Sound off below in the comments.

Did Hannah Ferrier Break The Bravo Fourth Wall Before Denise Richards?
Todd Chrisley Debunks Lindsie Bombshell: Wait, She Was Involved?!
Is Isabel Roloff Worried How Pregnancy Will Impact Her Eating Disorder?
Savannah Chrisley Under Fire For Catching A Shark: Did She Release It?
Anna Duggar Reportedly Stays With Josh At Guardians’ Home Most Nights