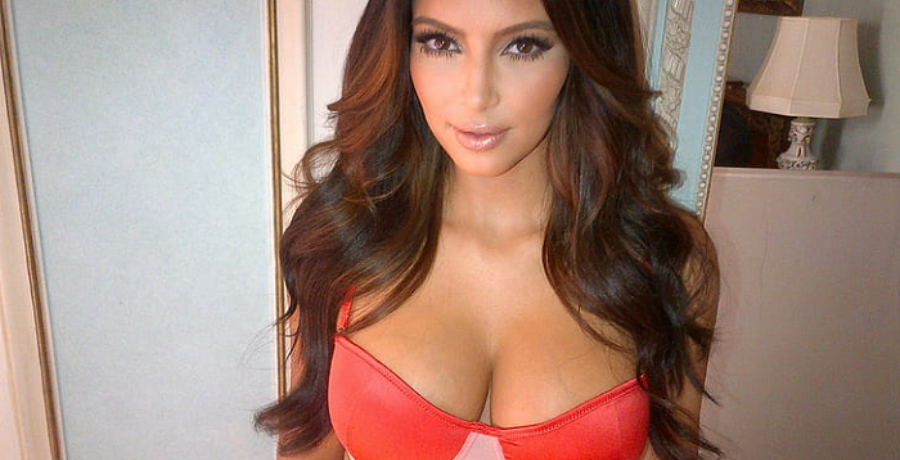 On Friday, Kim Kardashian heated up social media. The Keeping Up With the Kardashians star took part in a red-hot photoshoot. And she got the help of her sisters, Kendall and Kylie Jenner. The trio rocked matching red bikinis in their latest shoot.

The 40-year-old proved that she can keep up with her younger sisters. She posed alongside Kylie and Kendall in barely-there bikinis for Valentine’s Day. Everyone knows that Kim is having marital problems at this time. She has kept mum about it while her husband, Kanye West, is ready to move on.

Read on to see the hot photos.

The reality star has been posting a series of hot photos and clips via Instagram. Kim Kardashian gave her fans a behind-the-scenes look at her new photoshoot for SKIMS. She showed off her famous curves in a red sports bra and matching high-waist brief. She kept the camera angle focused on her cleavage and lean legs.

In some of the frames, fans could see Kendall bending over the background. Kim also cracked some jokes. She shared a meme that showed a throwback photo of the three sisters and one of them during the photo shoot. It read: “How it started vs. How it’s going.”

These photos came just in time for Valentine’s Day. Fans fell in love with the photos. Some of them were blown away by their looks. Here are just some of the comments, most of which are about Kendall:

Rather than hiring models, Kim revealed that stylists would use her outfits, take photographs of them, and send the photos to her. This allowed her to see which one she wanted to wear during the shoot rather than trying them all on at once. That’s when Kim decided on having a red-hot photoshoot with her sisters. It certainly worked since it won fans over.

What is Kim Kardashian planning for Valentine’s Day?

Kim Kardashian is focusing on her kids this Valentine’s Day. An insider told People that she will not be spending the day of love with the rapper. The couple continues to live their separate lives. Kim resides in California, while Kanye lives in Wyoming.

“Kim is great. She has a Valentine’s Day celebration planned with her kids and family. She likes to make it special for the kids,” the insider told People on Friday, February 12.

In fact, the KKW Beauty founder and the “Jesus is King” star isn’t even on speaking terms.

“It’s obvious that she is just focused on the future,” the source added.

Kim and Kanye share four children together – daughters North, 7, and Chicago, 3, and sons Saint, 5, and Psalm, 1. The couple is in minimal contact during this time. This comes after Kim reportedly hired a superstar attorney to help her with her divorce. They want to move forward with an official split in the near future.

What are your thoughts on Kim’s new photoshoot with Kendall and Kylie? Sound off below in the comments.

‘When Calls The Heart’ Season 9 Has Started Filming: All The Details
Robyn Brown Pregnant Rumors Swirl: Kody’s 19th Child On The Way?!
‘Love After Lockup’ Spoilers: WAIT! Doug Cheated On Rachel The Whole Time?
A New ‘Big Brother’ Baby Has Been Born! Who Gave Birth? [See First Pic]
Todd Chrisley Admits His Wife Julie Has Way More Class Than He Does