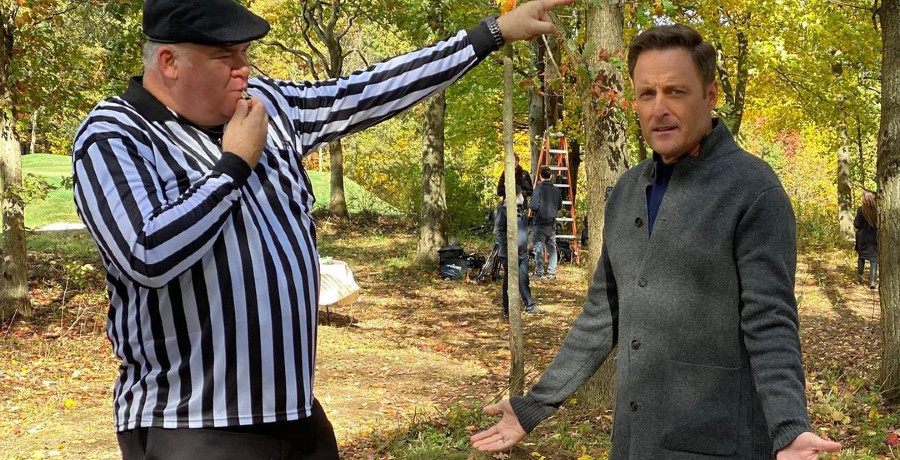 Bachelor Nation fans are not happy with Chris Harrison. His recent comments to Rachel Lindsay regarding Bachelor frontrunner Rachael Kirkconnell sparked a slew of backlash. One fan is so over Harrison’s problematic comments that they have a petition going to get ABC to fire him. The last fan-led petition resulted in Matt James being named the first Black Bachelor lead. Will the new petition have the same success?

The drama surrounding Chris Harrison, Rachael Kirkconnell and Rachel Lindsay is a lot to dig into. Rachel Lindsay was the first Black Bachelorette in 2017. Before – and after – Matt James was announced as the lead of Season 25, she’s been highly critical of the show’s lack of diversity. She’s also a correspondent with the entertainment news show Extra. Earlier this week, she had a tense interview with Chris Harrison about Rachel Kirkconnell.

Rachel Kirkconnell is a contestant on Season 25 of The Bachelor. She is this season’s frontrunner. But some shocking allegations of her past racist behavior have put a damper on the show. Most recently, photos surfaced of her taking part in an Old South antebellum ball.

In recent years, antebellum balls and Southern plantations have come under scrutiny due to the history of slavery in the U.S.

During his chat with Rachel Lindsay, Chris Harrison gave excuse after excuse in defense of Rachael Kirkconnell. However, fans (and Rachel Lindsay) were not having it. In fact, the blowback was so bad, Harrison had to issue an apology to the former Bachelorette and Bachelor Nation fans for his comments.

This is not the first time Chris Harrison has come under fire for misinformed comments. When fans were calling for a Black Bachelor, Harrison said that the show “won’t pick one just to pick one.”

That quote is in in a fan petition to get ABC to fire Chris Harrison as host of various shows in the Bachelor Nation franchise. A fan named Luan Martinez started the petition just three days ago. It has already garnered almost 35K signatures.

The petition demands that ABC holds Chris Harrison accountable for his problematic behavior.

Could Those Rumors of ABC Replacing Chris Harrison Come True?

In January, rumors circulated that ABC was looking to push Chris Harrison out of his hosting job and into retirement. At the time, it was rumored that Bachelor Nation alum Wells Adams was in line to replace Harrison.

However, Wells Adams shot down those rumors. But with the latest foot-in-mouth incident, the network could reconsider replacing Chris Harrison.

The Bachelorette Season 16 alum @BrettSVergara has the perfect solution.

Instead of Chris Harrison releasing a notes app apology to Rachel Lindsay for that disturbing interview in a few hours or days, how about ABC just gives her his job? #TheBachelor

For her part, Rachael Kirkconnell issued an apology for her previous behavior.

Do you agree with the petition to fire Chris Harrison? If ABC does fire him, should Rachel Lindsay or someone else step into the role? Let us know your thoughts in the comments down below. Be sure to join our Bachelor/Bachelorette Facebook group to connect with other Bachelor Nation fans.