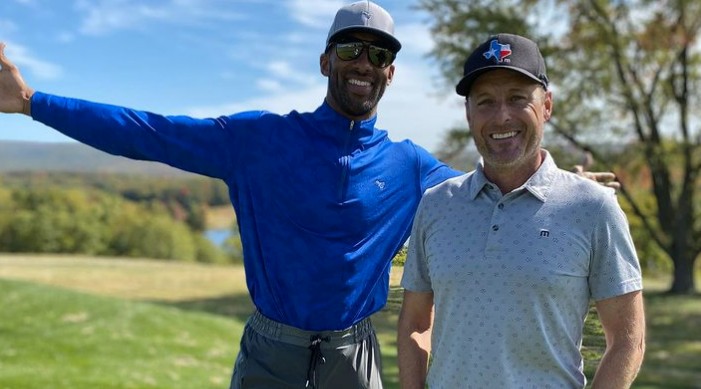 Rumors continue to fly that The Bachelor host Chris Harrison could be leaving the franchise. The rumors started this past summer when JoJo Fletcher filled in for Chris during Tayshia Adams season of The Bachelorette. As it turns out, he was only gone a short time and it was for an important moment in his life. Chris was helping his son move to college. Now, Matt James season of The Bachelor is airing and once again rumors are flying. Could the franchise really be forcing Chris into retirement?

Is Chris Harrison being forced out?

Gossip Cop shared information about the rumor that continues to circulate about Chris. The rumors initially started out saying Chris could be leaving because he is building a house in Texas. Those rumors were shot down. Since the show only films a few months at a time, he will just commute. In fact, Chris is moving to Texas because of his children and also a partnership with a local brewery. Girlfriend Lauren Zima is reportedly moving in with him.

Now, the rumors are flying that perhaps the franchise is looking for a younger face to host the hit series. When discussing the rumors, Tom Bergeron was brought up. It was said he was replaced for a younger, Tyra Banks.

An insider shared with the gossip site OK! that Bachelor production is aware the show needs some refreshing. However, they also noted that if it were to come true, Chris would be completely blindsided.

However, as it turns out, it’s all completely false information. The show is not looking to replace everyone’s favorite host. Hopefully, Chris Harrison will be host of The Bachelor for a very long time.

Hosting duties of The Bachelor

Matt James season of The Bachelor is currently airing. Fans love seeing Chris step in and announce the final rose for the night. They also love seeing him interrupt dates with important information. In fact, fans saw him interrupt a cocktail party Monday to introduce Matt to five new ladies. Of course, he is also there to offer advice to the lead. And, he also helps contestants through tough times. Plus, if the relationship works, Chris can even officiate the wedding. He’s the man of all trades, so to speak.

Chris also helps with dates at times. He and Wells Adams announced the fights that took place on Monday night’s group date. Everyone loves Chris and the personality he brings to the show. Let’s face it, The Bachelor wouldn’t be the same without Chris Harrison.