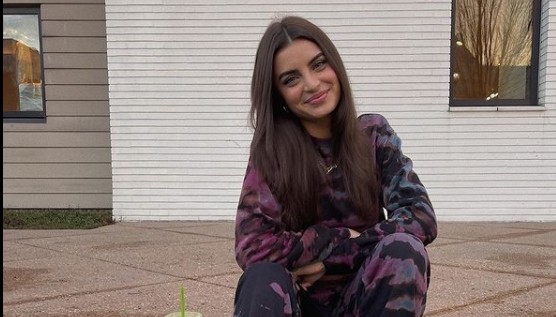 Bachelor Nation has been waiting for Bachelor contestant Rachael Kirkconnell to make a statement regarding rumors surrounding her. It all started with a TikTok in which a former classmate accused her of bullying other girls for dating Black men. Then, photos surfaced of Rachael attending an Old South antebellum ball. Many have been outraged and feel she needed to speak out. Chris Harrison also drew controversy and hate for a conversation he had with former Bachelorette Rachel Lindsay. Now, just hours after rumors stated ABC had rejected Rachael’s first statement, she released one this evening on Instagram.

Rachael went to Instagram to share her statement for the rumors surrounding her and events that have led others to believe she is racist. She began the statement saying, “While there have been rumors circulating, there have also been truths that have come to light that I need to address.”

Rachael went on saying, “I hear you and I am here to say I was wrong.”

Rachael went on telling fans at one point she didn’t recognize how racist and offensive her past actions were. She also admits she knows that does not excuse her behavior. She said, “My age or when it happened does not excuse anything.” Rachael said, “I was ignorant, but my ignorance was racist.”

Rachael continued saying she was sorry to the communities and individuals whom she offended. She said it is nobody’s responsibility to educate her. That is on her. And, she intends to move forward doing everything she can to learn more about being antiracist.

Rachael also encouraged everyone to learn from her mistakes and get educated on why her actions are considered racist.

She continued on saying she doesn’t expect forgiveness because of one apology. However, she hopes she can earn everyone’s forgiveness through her future actions.

Her full statement is below. 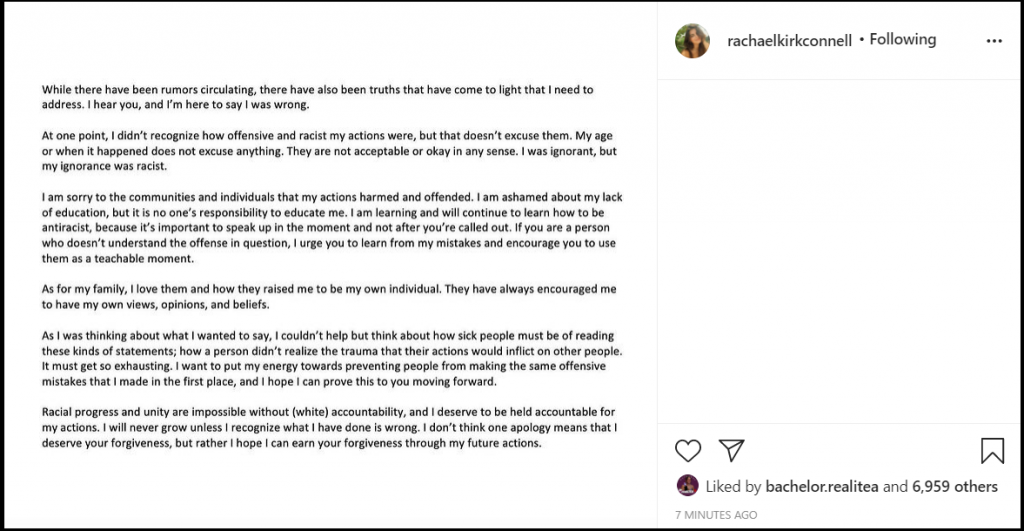 Host Chris Harrison is also under fire and issued a statement of his own regarding the situation. This week he spoke with Rachel Lindsay and many fans were not happy with the interview. They felt he was condoning Rachael Kirkconnell’s actions and defending her. He had simply asked Bachelor Nation to give her grace. He also wanted fans to give her the opportunity to speak out for herself. Chris later apologized for his choice of words and asked for forgiveness. Many fans were calling on the ABC show to fire him over this conversation with Rachel.

Others were waiting to see if Rachael would own her actions and issue a statement. She finally did.

What do you think about her statement? Stay tuned for more updates.