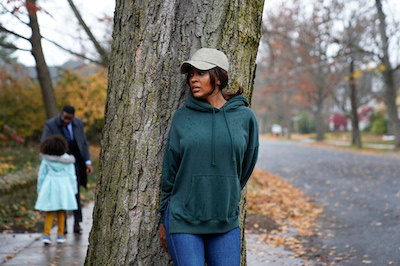 In addition to each original movie, there is a documentary that will air. This real-life story is related to the LMN Ripped From The Headlines movie.

Are you ready for some new Lifetime movies?

Airing on Saturday, February 13 is Death Saved My Life, at 8 p.m. Eastern. Then, get ready for Beyond the Headlines: Faking Death, which airs on Lifetime, at 10 p.m. Eastern, right afterward.

According to Lifetime’s LMN synopsis, On the surface it seems Jade (Meagan Good, Think Like A Man) has it all- She has a successful marketing career, a husband admired and respected in the community, and a young daughter they both dote on. But behind closed doors, her life is far from idyllic.

Her husband Ed (Chiké Okonkwo, The Birth Of A Nation) is a controlling man who is physically and psychologically abusive. When Jade decides to leave Ed, he tells her “If I can’t have you, nobody will,” a threat which becomes very real when she discovers he has hired someone to kill her. Knowing no one will believe her, Jade realizes the only way to escape Ed is to make him believe the hitman completed the job and that she is dead. In addition, La’Myia Good (The Wood) plays Jade’s sister Leigh.

In Beyond the Headlines: Faking Death, writer Elizabeth Greenwood discusses her research on the phenomenon of “pseudocide,” or faking one’s own death.   Based on the experience of Jane in Death Saved My Life, Greenwood discusses the main reason why women fake their deaths.

She also explains why a disappearing woman in books and movies is so popular.  She presents real-life cases of faked deaths that have captured the public eye, and why people resort to such lengths to disappear.

The Long Island Serial Killer: A Mother’s Hunt for Justice tells the story of Mari Gilbert’s search for the truth behind what happened to her daughter Shannan, a sometime escort who disappeared after a Long Island “date.” After Shannan (Katharine Isabelle, The Order) fails to come home, her mother Mari (Kim Delaney) knows something is wrong.

Pleading to the police to take her concerns seriously, she keeps pushing the police for answers. Mari’s insistence that her daughter not be overlooked eventually leads to a horror hidden on Long Island for more than a decade. They find 19 bodies of young women.

Though the search for the killer is still ongoing, Mari’s passionate dedication to giving her daughter and other forgotten women a voice. She keeps the case alive with hopes of a breakthrough.

Afterward, enjoy an encore airing of the A+E documentary, The Long Island Serial Killer: Special Report. This new documentary includes information on the real-life story with expert and law enforcement interviews offering personal accounts of the efforts to solve the case and Mari Gilbert’s search to uncover the truth. Deborah Norville, one of the executive producers of The Long Island Serial Killer: A Mother’s Hunt for Justice original movie, will share her insights on the case from reporting on the story for Inside Edition.

Lifetime’s Girl In The Basement

Closing out February is Lifetime’s Girl In The Basement. This is Elisabeth Röhm’s directorial debut. This will premiere on Saturday, February 27, at 8 p.m. Eastern. In addition,  Beyond The Headlines: Surviving Child Abduction and Imprisonment will air right after, at 10 p.m. Eastern.

This story is inspired by actual events. Girl in the Basement is the horrific story of Sara (Stefanie Scott, Insidious: The Last Key). Sara is a vibrant teen girl who was looking forward to her 18th birthday. She just wants to move away from her controlling father Don (Judd Nelson).

However, before she could ever blow out the candles, Don imprisons her in the basement of their home. While Don tries to convince wife Irene (Joely Fisher) that Sara ran away, he would secretly visit her in the basement to torture and rape her while Irene and her sister Amy (Emily Topper, The Chosen One) continued living upstairs.

As the years pass, Sara gives birth to several children, alone in the basement.  Don eventually brings up their youngest son. He leaves the baby on the doorstep for Irene to find. Attached is a note from Sara saying that was her son. The note explained that she couldn’t care for him.

Because of this note, Irene finally accepts Don’s claims about Sara. After decades of captivity, Sara finally escapes, and her family learns the devastating truth about what had been going on for over 20 years right beneath their feet.

Don’t Forget to Catch The Documentary

In Beyond the Headlines: Surviving Child Abduction and Imprisonment,  two real abduction survivors share their stories following the premiere of the Girl in the Basement. Lori Poland, kidnapped at 3 and left for dead in an outhouse in 1983, and Katie Beers, abducted and imprisoned for 17 days by a family friend in 1992, recount their abduction experiences and share their insight on overcoming and transcending past their childhood traumas.

In this story, a small island community is turned upside down when one of the town’s citizen’s Russel Douglas (Paul McGillion, Stargate Atlantis) is found dead the day after Christmas. Brenna Douglas (Jill Morrison, A Sugar & Spice Holiday) was Russel’s estranged and soon-to-be ex-wife, who often complained to her former beauty queen best friend Peggy Sue Thomas (Diane Neal, The Following) that Russel was physically and emotionally abusive.

Moreover, through an investigation that twists and winds its way, Russel’s murderer is finally revealed.

Following the premiere of Circle of Deception, Lifetime will be premiering a Beyond The Headlines: Beauty Queens Gone Bad. This documentary delves deeper into more shocking stories of criminal deception. Circle of Deception is inspired by Ann Rule’s popular true-crime work, Practice to Deceive, which focuses on a shattering case of a murder on Christmas day.

Lifetime’s A House On Fire

The final movie pair airs on Saturday, March 13. First, A House on Fire premieres at 8 p.m. Eastern. Right after, Beyond The Headlines: Mental Health Myths and Misconceptions airs at 10 p.m. Eastern.

A House on Fire follows a brilliant doctor and mother Deborah Green (Stephanie March). She appeared to live the epitome of a picture-perfect life with two children. Apparently, she had an adoring husband (Shaun Benson) and a beautiful house in an opulent neighborhood. But behind the curtain is a rocky marriage that includes Deb’s difficult bedside manner. That is not all.

Also, her inability to get along with other doctors. Add an abuse of pills and alcohol. Don’t forget major envy of her husband’s successful medical career and his easy social manner. All of this takes a terrible turn and leaves her family and marriage in ruin.

A companion Beyond The Headlines: Mental Health Myths and Misconceptions documentary will follow the premiere of A House on Fire. This will take a deeper look into the issues of mental health and awareness that arise out of the film. A House on Fire is inspired by New York Times’s bestseller, Ann Rule’s true crime book, Bitter Harvest. This book uncovers the horrific truths of a house fire and the events that led to it.

Are you ready for some Lifetime movies?