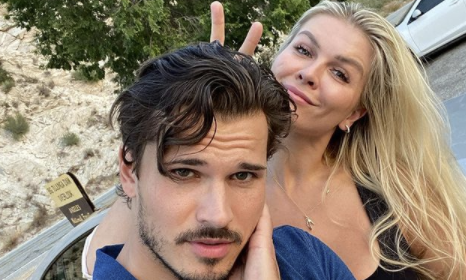 Dancing With The Stars fans followed Gleb Savchenko’s rollercoaster breakup over the past several months. The pro dancer announced that he and his wife of 14 years, Elena Samodanova, were splitting up. And ever since, it’s been a constant cycle of drama and rumors.

Now, another rumor is coming to light — Gleb and his new girlfriend, Cassie Scerbo, are taking a break. Fans want to know why. Could Gleb and Elena get back together?

Will Gleb Savchenko And Elena Samodanova Get Back Together After A Chaotic Year?

“They are taking a break. They haven’t exactly split but are just spending time apart,” an insider exclusively told Us Weekly. The source went on to say that Cassie and Gleb still keep in touch. Things aren’t hot and heavy, but they’re not exactly ice cold either.

“Cassie has been back and forth to Florida visiting family and Gleb has been spending time with his kids in Los Angeles,” the insider continued. “He’s also trying to make things more cordial with his soon-to-be ex-wife. His family is his focus right now and he’s handling things privately.”

If you follow Elena Samodanova on Instagram, you know she didn’t take things well after Gleb and Cassie ran off on a romantic couples’ vacation late last year. The pair doubled with Gleb’s best friend and co-star, Keo Motsepe, and his girlfriend, Chrishell Stause. Elena expressed her outrage in a series of Instagram lives. She didn’t hold back and let fans know how angry she felt.

The inside source addressed this too.

“Elena has made her feelings clear on social media and was really upset over Gleb going on vacation to Mexico with Cassie. She went crazy over this and couldn’t believe he went so public with a new relationship so quickly,” they told Us Weekly. “It was sort of a slap in the face.”

The Couple Continued To Blame Each Other For The Divorce

Gleb and Elena continued to smack each other in the press over the next several weeks. However, things did quiet down and they even seem somewhat friendly on social media these days. Gleb recently got a new haircut, and Elena playfully commented. PEOPLE even reported the exes reunited and went for an outing together with the kids.

Gleb Savchenko and Elena Samodanova may never get back together, but it really seems like they’re learning to be civil with one another. Even if it’s just for the sake of their daughters, it’s a little refreshing to see the hostility wrap up. Gleb may even reunite with Cassie Scerbo once things are more settled at home.

So what do you think? Is this chaotic chapter finally coming to an end? We want to hear from you!

Years Of Botox Leaves Simon Cowell’s Face ‘Stuck Like That’ Experts Confirm
Todd Chrisley Encourages People to Find A Common Ground
Bates Family Shares Special Photos: ‘Dad Is Already Getting Teary Eyed’
Will There Be A Season 3 Of Netflix’s ‘Glow Up’?
Brittany Cartwright Says She’s Not A Bravo Watcher