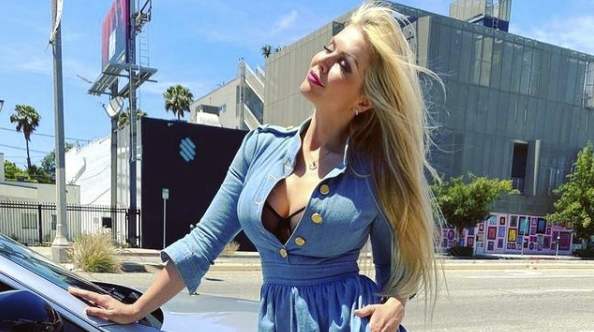 Hell hath no fury like a woman scorned. Elena Samodanova and her ex, Dancing With The Stars pro Gleb Savchenko, are calling off their marriage after 14 years. And, while Gleb vacations in Mexico with his new girlfriend, Elena is trash-talking on Instagram. Over the past few days, she started taking fan questions during Instagram lives. She doesn’t hold back during the live streams and even answers questions about Gleb.

Gleb and Elena ran a little ballroom together. Fans wanted to know what would happen to it and wondered if they could still run it together.

“We’ve tried to figure out … if we’re going to be running it together. Not at this moment, I’m just too pissed at him,” Elena admitted. “So I won’t be able to do anything at this moment. Maybe later.”

Right now, Elena has their daughters while Gleb is on vacation. Reports say his new lady love is none other than actress Cassie Scerbo. A source told Us Weekly the couple has been together for a few weeks now. Gleb’s close friends, Keo Motsepe and Chrishell Stause, joined them for a fun couples’ getaway.

“I don’t know if Prince Charming exists anymore, it’s a fairy tale which I do not really believe anymore,” Elena told fans.

“I’m not a quitter, I never give up. But the older we get, the less bulls–t I believe,” she continued during the discussion with fans. “Most men [are] like this. … My advice [is] don’t give them a second chance. I gave [Gleb] second, third, fourth, fifth chances and we never worked it out. So don’t give him a second chance. … We used to say in Russia, ‘It’s better to be alone than with someone who doesn’t deserve you.’”

In response, Gleb posted a cryptic, yet seemingly pointed photo in his Instagram story.

“Never condemn someone based on a little something that someone told you,” the photo said. “There is always a lot more to the story!”

This isn’t the first time Elena Samodanova has had a lot to say about her breakup. Shortly after Gleb Savchenko announced their split, Elena spoke to PEOPLE magazine.

“Gleb’s ongoing infidelity and a recent inappropriate relationship has created turmoil in our marriage and absolutely torn our family apart,” she said at the time.

Most people thought she meant Chrishell Stause at the time. Those rumors died down a little when Chrishell publically announced she and Keo Motsepe were an item. However, other fans believe Chirshell and Keo are just pretending so she can really be with Gleb. No matter how you look at it, it’s an incredibly complicated situation.

Make sure to follow Elena Samodanova on Instagram so you can know when she goes live next.