Is Nanny Faye Chrisley dead? This is the question on the minds of many who follow the Chrisley Knows Best official Instagram account. Unfortunately, something the account posted early this morning has the Chrisley Knows Best fan base in a panic. What exactly happened that caused fans of the reality TV series to panic? And, more importantly, is Nanny Faye Chrisley dead? Keep reading as we share what we know about this Instagram panic.

“An Angel Dwells Among Us”

The official Instagram account for the Chrisley Knows Best series shared a picture of Nanny Faye Chrisley early this morning. The photo featured Todd’s mother playing a harp. The Instagram account declared, “An angel dwells among us” in the caption. 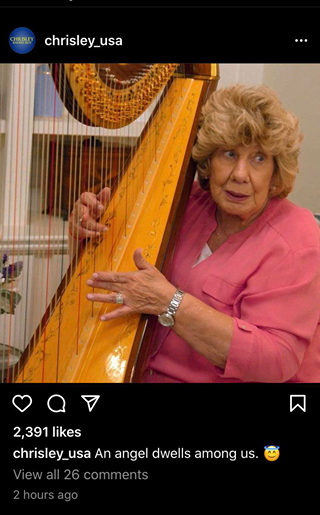 Fans of Chrisley Knows Best did NOT respond well to the caption attached to this photo. In a comment liked over a dozen times, one follower noted “the caption definitely scared me.” Several individuals replied to the comment agreeing they were not happy with the way the caption was worded.

A second individual begged the Instagram account to update the caption. Others also agreed this was a good idea.

One follower noted the caption made their heart drops. Others chimed in to express how confused they were. 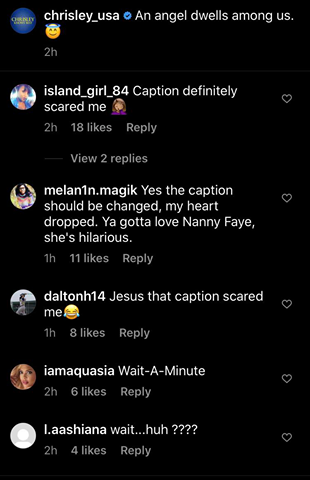 The general consensus was a post with a picture of Nanny Faye with this caption felt like a death tribute. So, did Nanny Faye Chrisley die? Is she alright? Fans continued to panic.

The page recants on the mistake

Just a couple hours ago, the page must’ve realized the grave error they made. The official account for Chrisley Knows Best, however, decided deleting the post and starting over was the best approach. Given how many comments asking if Nanny Faye Chrisley was dead or alive had popped up… It made sense that the Instagram account would just want to delete the post. 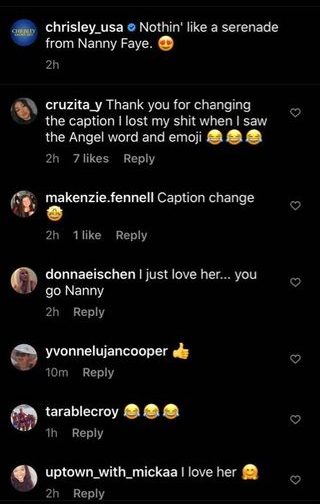 Still, there were plenty of people who saw the original post. A few were quick to thank the account for fixing the caption.

Fortunately, Nanny Faye is not dead

Because the Instagram account fixed the mistake… We have no reason to believe Nanny Faye Chrisley is dead. This is the kind of headline fans should not believe until Todd Chrisley or one of his children confirm it. Fortunately, fans can rest easy knowing she is alive and well!

Are you happy this caption was just a mistake?