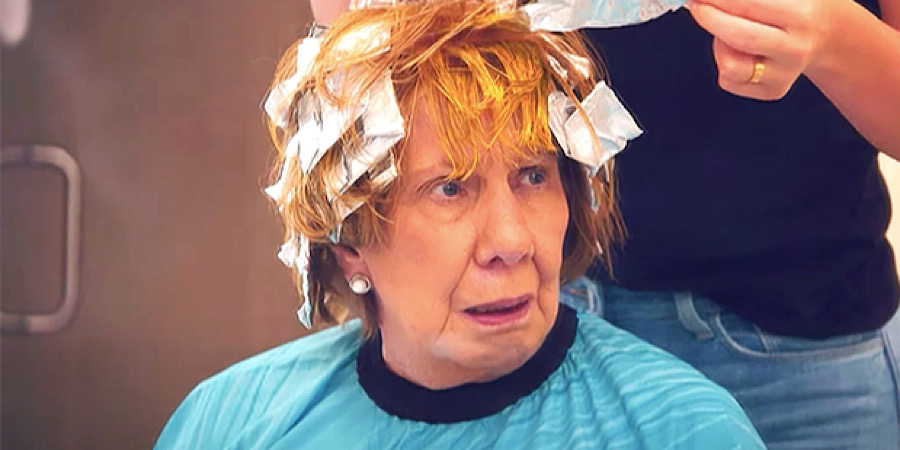 Tonight, Chrisley Knows Best returns after almost a month hiatus. Much like the season eight premiere, the focus is on a new hairstyle. This time it is Nanny Faye who is getting the makeover courtesy of granddaughter, Savannah. But, not everything goes as planned. In this family, anything can and will happen.

When Season 8 premiered, Savannah shocked her parents, Todd and Julie, by chopping off her hair. Her pixie hairstyle made them think she had lost her mind. Todd asked how she would attach the veil for her wedding, which has since been called off. Regardless of what her family (and fans) thought, she had fun with her new look, a look that was actually unintentional. She wanted to mimic Miley Cyrus’ super short pixie and a bad dye job forced her into the decision:

“But then, recently, I think I got my hair colored too close in time by two different people. And I don’t know what happened, but it just fried my hair. So I kinda had no choice because literally back here it was just a straight line cut with bleach. It was not a good day for Savannah. So, finally, I just was like I’m gonna cut it. I did it and I love it.”

Eventually, Savannah began missing her long hair and has grown it back over time. But, it does not mean she has stayed away from hair color completely.

Nanny Faye needs her hair color fixed and Savannah is quick to lend a helping hand. When brother, Chase asks if she has any experience coloring hair, his sister admits she does not. But, having had her hair dyed professionally, she feels this has given her a leg up. “Basically, I’m gonna learn by watching someone in the mirror do it to me.” She thinks she’s learned by osmosis. During the coloring process, Savannah reassures her Nanny it is going fine. She has foils and the whole nine yards going. This is a lot for someone who has never colored in their life.

Upon taking said foils off, it is clear Nanny Faye’s new hairstyle is a fail. It is orange, not the intention. “Holy sh*t, what have you done?” Nanny Faye asks. Savannah is just as freaked out but knows she needs a quick fix. A reassuring Savannah says she can remedy this mess but I would not trust her, would you? According to Savannah’s Instagram, her solution is a wig. And judging by Nanny Faye’s reaction, she is definitely feeling herself and new hairstyle. You can catch the new season of Chrisley Knows Best Thursday nights at 10pm only on USA.