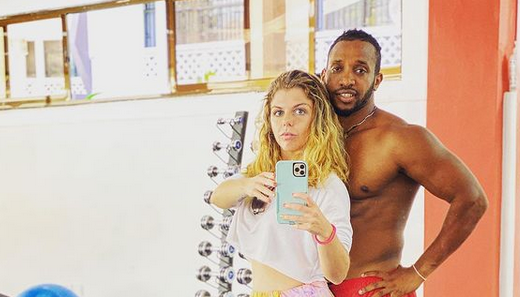 Former reality TV star Ariela Weinberg’s new photo has been going around social media for all the wrong reasons. Currently, it’s Ariela’s plastic surgery rumors. Ariela and Biniyam Shibre are fan favorites on the 90-day Fiance: The Other Way. They share their lives as a young couple living in Ethiopia. The two have one child together, baby Aviel.

Many have noted after her pregnancy, the New Jersey native lost a lot of baby weight. The quick-change back to her ideal weight did not come without work. In addition, Biniyam and her have been posting several photos of their workout sessions on social media for their many followers.

According to ScreenRant, she has lost close to 50lbs since the day she gave birth.

“Breastfeed if you want to lose weight. Also weight training helps a lot. I don’t eat much late at night” her natural weight loss journey inspired many fans.

Then the Instagram fan page lakeju69 leaked the photo with a meme at the top ‘HER SPIRIT ANIMAL MUST BE LARISSA’ The controversial photo shows Ariel in what looks like a doctor’s chair getting injections to her face. The calm mother has her eyes closed as she gets the procedure from a lady standing over her. This photo is what started the hate train towards the 28-year old. Fans keep attacking Ariela online for her looks. “They’re always calling her ugly and then are talking shit. ”

Fans of the star comment under the post. “So wait a minute, they can’t afford to live a nice life to her parent’s standards but she can afford to get work done?”

Others battled whether it was filler she was getting or botox.

“For the life of me, I can’t understand why these young girls do this to their faces so early on in their lives.” It seems most were disappointed with her choice.

Of course, people on Reddit started a whole thread about her Botox photo. They say, “Y’all bullied her for her appearance, and now she’s getting criticized for getting work done. Y’all toxic af.”

Shockingly one compared her to the ‘next Larissa,‘ her former 90 Day Fiance Castmate.

Some fans of the 90 Day franchise blame the show for Arielle getting work done on her face. “I feel like onlyfans and plastic surgery are the rites of passage for 90-day fiance cast members.”

Apparently, another fan said, “Honestly, who can blame her? There are even memes of her being compared to the hunchback. That has to mess with any woman’s confidence, especially a woman who just had a baby.”

What do you think about Ariela’s plastic surgery rumors? Let us know in the comments.