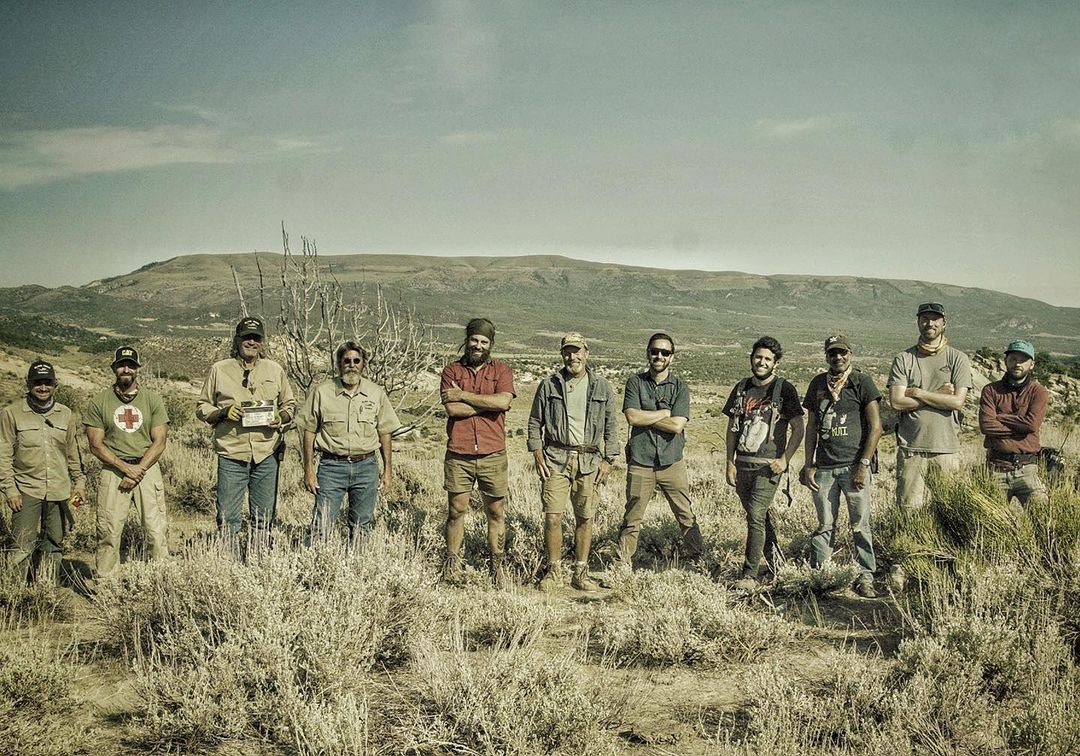 Discovery Channel’s new series, Mystery at Blind Frog Ranch, just aired its third episode Friday evening. The reality series follows a father and son as they hunt for treasure on their 160-acre ranch. Though the focus is searching for gold, this is more than just a treasure hunt.

Duane Ollinger is the star of Mystery at Blind Frog Ranch. After spending over 30 years in the Texas oil industry, he decides to use his vast experience drilling for oil to search for treasures rumored to be in Utah’s Uinta Basin. He purchased a 160-acre plot of land in 2018 and brought his son, Chad, in to help him.

Chad Ollinger is the son of Duane Ollinger. After hearing what his father was planning, Chad decides to sell his home and crop-dusting business. He bought a school bus and move his wife and four children to live on the land.

Duane and Chad are digging hard for gold. With hard digging comes big equipment and Duane has invested a large sum of money into this endeavor. With so much equipment, Duane decided to bring in his longtime friend, Charlie.

Charlie Snider, or “Charlie Boy”, spends 20 years is as sheriff’s deputy and is head of security for the ranch.

Duane also contacted Eric Drummond. Eric is a geologist with over 40 years of experience. He is well known in the oil industry and an expert at “finding things.” Eric gives the group a scientific view of where to look for the gold.

The first thing Duane did after purchasing the ranch was to take satellite scans of the area. The scans showed nearly two miles of caves and caverns running underneath the property. The next step was to attempt to access the caverns. The Ollingers start drilling where they believe could be an access point into the cavern. They punched into a void filled with water. Dozens of frogs were inside the void and appeared to have been underground for a long time. Duane describes being able to touch the nose of the frogs before they would hop away as if they were unaware of his presence. Duane decided right then to call it “Blind Frog Ranch.”

Shortly after drilling the access hole, the area began to flood until it was underwater. The Ollinger’s would now have to find a way to remove the sediment now filling their access hole. Eric suggested testing the sediment for gold. The group pumped out the sediment and were happy to find raw gold and even a Spanish gold coin. These finds were evidence that more gold must be in the almost two miles of caverns.

Even after pumping much of the sediment out of the original access hole, the hole was still underwater. Duane decides to try and dig another hole in an attempt to find a dry access point. He digs a 30-foot vertical hole costing $6000 only to find that it is still flooded at the bottom.

Is it Too Dangerous…or not?

Deciding it is too dangerous to allow Chad to drop into the 30 foot hole, Duane digs out the original hole. The water becomes clearer and Chad is finally able to dive into the cavern.

Chad Ollinger dives into the cavern along with camera operator, Ryan Walsh. After searching in the vast cavern, Chad locates what appears to be a large manmade box. The box is made of large logs held together with rope. This find gives more credit to the idea of treasure being in the caverns. Although Chad was able to make this huge find, they still have no way to get anything out. A new access point must be found.

Eric decides to use UV dye to turn the water green. They will then search the property for areas where the water might be coming out. Eric, Chad, and Charlie search the property where they locate a small cluster of cedar trees 1/4 of a mile Northwest of the original dig site. They find the green water, which glows brightly when under UV light, in what appears to be a natural spring. Duane spends $5000 digging over 35 feet, but the group is unable to punch into the cavern.

Episode 3 ends with Charlie finding strange worms swimming at the original dig site. The worms appear translucent and glow under UV light indicating there is an entire ecosystem living inside the cavern system.

The locals around “Blind Frog Ranch” are not very happy about the Ollingers digging for gold. They seem truly scared of what goes on in the basin. A resident by the name of Veronica Lawson describes the basin as being “Phenomenal”, “Spiritual”, and “Active”. She gave a warning to the Ollingers saying,

“Well, I live right here in the middle of town. A lot of people have talked about there being perhaps a burried space ship or something like that. I suspect that it is something more natural, but I also believe that it is not a good idea to dig out there. Don’t go looking for trouble.”

After the Ollingers and their crew locate a mutilated deer having no head, Charlie decides to speak with Mark Julian. Julian is a member of the Navajo Nation. He describes what people call “Skinwalkers”. They are shapeshifters. They are “medicine men that went bad”. The “Skinwalkers” began appearing after the Navajo tribes cursed the land in the 1860’s.

Animal mutilations are not the only things that have happened at “Blind Frog Ranch.” Production is also hindered by malfunctioning drones crashing to the ground and audio equipment suddenly not working.

The Uinta basin has been a hot spot for UFO sightings and other paranormal activity. There are sure to be many more exciting things happen as “Blind Frog Ranch” is only 20 miles North of the legendary “Skinwalker Ranch”. Mystery at Blind Frog Ranch has only just begun, but it proves to be an exciting ride.

Check back with TV Shows Ace for more news and don’t forget to watch Mystery at Blind Frog Ranch Friday at 10 PM EST.