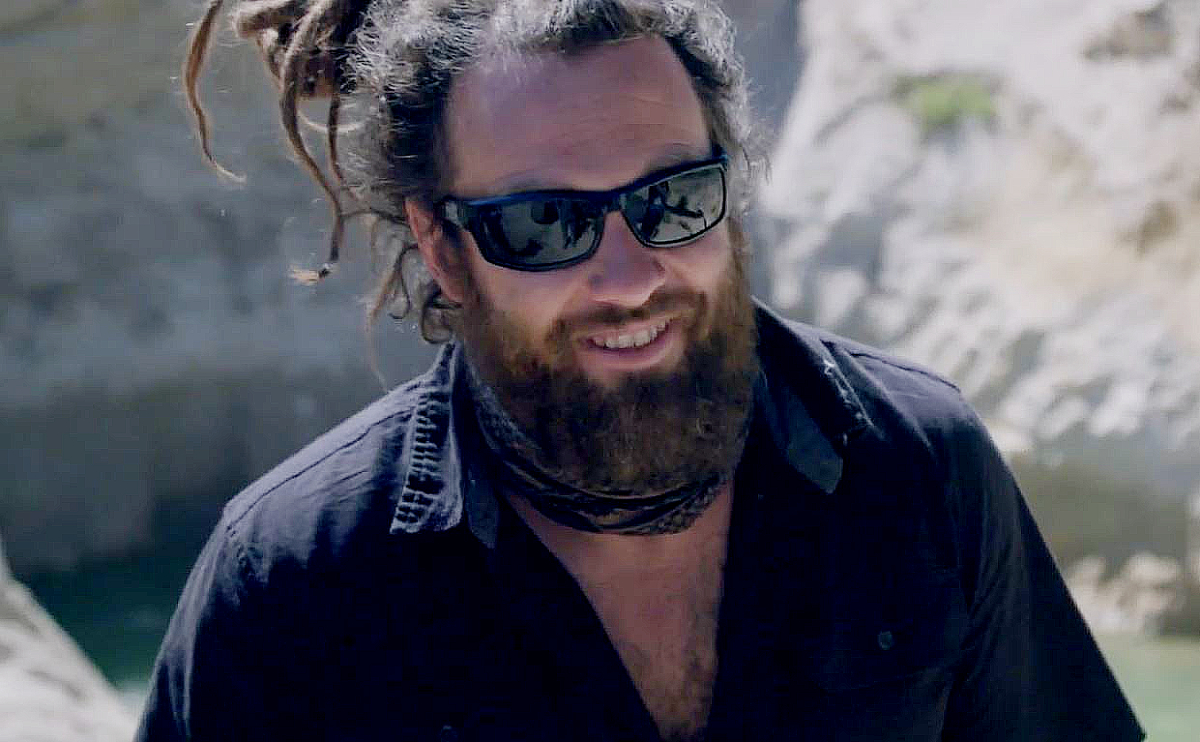 Mystery At Blind Frog Ranch is Discovery’s breakout Friday night guilty pleasure for many viewers. It is a controlled treasure hunt that is coping with unusual and inexplicable events that have the entire crew scratching their heads.

The series is part treasure hunt and part paranormal woo that digs up hidden secrets, figuratively and literally.

Texas oil man Duane Ollinger and his son Chad Ollinger, who TV Shows Ace interviewed, have relocated to the stunning state and are convinced there is gold to be found in the Uintah County ranch they have acquired.

The Ollingers have amassed a small expert team looking for gold and buried treasure in Uintah County. They have predators and weather to deal with along with alleged paranormal elements that plague the area, at least according to the numerous interviews the producers intersperse the hunt for riches with. The kicker is that they feel genuine. These locals really are afraid of something out there in the arid terrain.

Say what you will about Utah, it is breathtaking and picturesque, it has a giant lake, and it also has a fractious history of a Mormon rebel-lead massacre.  The rumor and hearsay mill say it is an alien visitation hotbed with Navajo Skinwalkers.

The timeline has taken the Ollingers years to get up and running, and 2018, Ollinger purchased sizable acreage southeast of Ballard, and named it the Blind Frog Ranch as a mass of blind frogs were found when they went exploring in the underground caverns and waterways.

This confirmed that life sustaining oxygen went well below and far into the underground caves and rivers below the mountains, stretching for many miles.

And with the proximity to the infamous Skinwalker ranch (it is about 20 miles away) the paranormal factor was ripe for the picking. Locals are genuinely concerned for the Ollinger’s well being.

What we do know from our exclusive preview of Friday’s episode is that Chad Ollinger discovers gold coins,

So is it the lost Rhoads Mormon gold? Perhaps.  Despite the locals trying to scare them with lore, the Ollingers are invested and have no plans to give up, and look forward to season two as they keep finding amazing things.

How has your dad approached you to come work with him on this and the ranch? How did this conversation happen?

Chad Ollinger: Well, he was building the team to get ready and he knows I can operate a lot of different stuff. He needed me to operate the underwater drones, and that’s kind of where it was at first. And then it turned into a lot bigger roles than that.

Talk about that on the second episode, especially when you defied what Duane asked you to do, which was to not go in the cave when diving.

Chad Ollinger: I guess I’ve kind of always had that personality in a way. I don’t always follow directions the best. And when I saw the opening, I knew I could get in safely and out safely… To an extent, I thought I had to just go ahead and do it.

Chad Ollinger: Everything was dark unless you had the light, but it has cleared up a lot, but it was very tight. As you can see on they did a heck of a job describing how tight it was.

Because it really felt like I could barely get through there and I couldn’t have gone through there with a scuba tank on, either.

It was a little eerie, no doubt, to know that if something does go wrong, you have to get back through that cage to get back out. That tight opening,

Can you talk about the discoveries made? Specifically the box that you discovered in the end of the second episode which was the cliffhanger, are there more discoveries like that?

Chad Ollinger: I don’t know how far I can go into this, but we look at the project at different angles, and we discover new things. There’s no doubt about it. And each discovery lead to more clues that do lead us…or to tell us that we’re definitely in the right direction.

Can you describe the discovered coin and what it was, where did it come from?

Chad Ollinger: Yes, they were old Mormon coins from the 1800s. We either think it’s either Spanish or the Aztecs that somehow got in contact.

We don’t know if the native Americans—who were used as their slaves—eventually were they partners and friends?

But after the native Americans had possession of it, maybe they worked some kind of deal out with Thomas and Caleb Rhoads from the Mormon church. And that’s how we believe the Mormons got a lot their Aztec or Spanish gold.

Your dad’s an interesting fellow. Now, is he pretty much full-time in Utah or does he go back and forth to Texas?

Chad Ollinger: He is kind of all over the place. New Mexico, Texas. A lot of times in Utah though. He stays there a whole lot, especially when we’re working out there, but he is all over.

He initially purchased the land with a couple other guys, but he’s the one that kept it going and ended up buying out one of his partners and still has one, but that partner just doesn’t have much to do with this Discovery project.

The locals are adamant that you guys shouldn’t even be doing anything out there. Have you met any locals that have given you indication that you’re playing with fire?

Chad Ollinger: Yes. And that is what we hear from the majority of the people we talk to, whether it’s native Americans or just like local town people like that. They are very hesitant and they’re worried about what we’re doing. No doubt about it.

What do your kids and your wife make of this? And are they ready for season two?

Chad Ollinger: Yeah, they are. They’re definitely ready for season two. the whole experience for all of this is just pretty wild. I mean, we’re just enjoying every moment.

Hopefully we are going to get a season two. It just seems like there’s so much to unspool here. I kid with people, describing this show being like Curse of Oak Island, except you guys actually find things.

Chad Ollinger: Haha yes! I mean, I’d be surprised if there wasn’t a season two, just because I feel like we’re on the verge of finding something absolutely incredible.

And we’re getting closer and closer. I just know that, so, yes

Did you discover whatever it was that decapitated that deer?

Chad Ollinger: Now, I don’t know if it’s going to be on there, but we had a game cameras up and we saw wolves and mountain lions and bears, so they’re all out there.

That would be the most logical reason for that to happen, but the way it was done, yet it seemed like it wasn’t one [of those animals] in a way. I mean, we tried to… It’s not like it was drug in [like a wild animal would have] and that’s the weird part, but definitely a lot of wildlife out there and that still possibly could have been what happened. No doubt.

Let’s talk about you personally. You have this Captain Fantastic life, that Viggo Mortensen movie, I noticed one of the taglines on your Instagram was discovering simplicity. Talk about that real and how that fits into being a TV star now,

Chad Ollinger: I just got that movie. Right? Yes. So before we were even approached by my dad or Discovery or anything, we sold the aviation business, my house, tons of extra stuff.

And it was like that was all working was, just to accrue more things, and a lot of people do.

I was working so much and then I couldn’t see my family hardly at least as much as I wanted to anyways.

So we thought, hell, let’s just sell everything and live super simple just live for the experiences now.

And it’s paid off so much. I mean, our kids are so much happier. We get to spend so much time together and we get to go exactly where we want when we want. So…I can’t say how good it’s been, it is amazing.

It’s definitely a discipline though, because the kids do have to learn. And they have to learn basic things so that they can get into college if they want. So you have to squeeze in the curriculum, in between all the adventures.

Chad Ollinger: Yes. Yes. Agreed. All the kids are so different. Some are super interested in math. And as a kid, I loved math too.

And then some are really interested in reading and that [subject] was very painful for me back then. So I kind of helped with the math and science. My wife does more of the reading and grammar and all that. So it works really well together.

Can you talk a little bit about what we can look for this season on Blind Frog Ranch?

Chad Ollinger: I know we find some extremely interesting things that lead us closer and closer to what we’re looking for.

And there is suspenseful moments along the way that still to this day, I’m like, what was that?

Tell me about your team, how they are to work with?

Chad Ollinger: My dad Duane owns the project and he’s the boss out there. And he has had years and years of owning a company and running different crews on high risk projects in the oil fields.

And, he just operates the same out there. It is a high risk job and we just don’t know what we’re going to encounter really, as far as like obstacles going away. It is good to have a strong leader like that. No doubt.

Geologist Eric is a genius. It is so much fun to just even go on a hike with him and ask him about different rocks and he tells you what kind it is, how it possibly got there. And he is a super humble guy too, he incredible guy to work with a hundred percent.

Charlie was retired law enforcement and he thinks of different angles that we would never have thought of, with regards to safety and preventative measures, he’s got your back. No doubt about it.

Did you feel anything different or as time went on, did you started to kind of sense and feel things in the valley and the ranch?

Chad Ollinger: When you go out there, I felt that there is a sense of energy, and it’s a good, good energy, no doubt about it, that that’s out there.

But that could be us just looking into it too hard. It is hard to say, you know?

We have had Shamans come out there and native Americans and so many other people that come out there [to check it out] and they verify that there is a good strong [paranormal] energy. I feel like I can feel it, but that I’m not a hundred percent.

Mystery at Blind Frog Ranch airs Fridays at 8 PM on the Discovery Channel. Episodes are also streaming on discovery+.