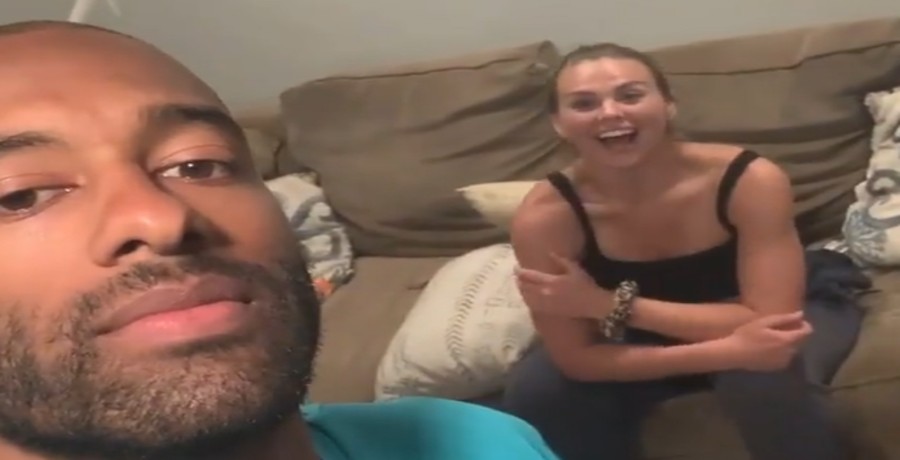 Hannah Brown and Matt James became friends when they quarantined together with Tyler Cameron. Matt, being Tyler’s best friend got himself a fast track to being the Bachelor lead. Tyler was a contestant, and final three, on Hannah’s season.

Recently, Hannah went to Instagram to wax poetic about how lucky the world is to have Matt for the Bachelor. Hannah said, “So thankful to call you a friend and to watch your journey to find love unfold. These girls better bring you more laughs than tears…and if not, the Beast (rawr) always has your back!”

Matt replied to her praise, “BREEZY. I already warned them about the BEAST.” Everyone remembers when Hannah showed up on Peter’s season acting like she’d made a mistake. Now, fans want her and Tyler to show up together on Matt’s season. With people showing up late in the season and the previews looking really dramatic, there’s no telling who might show up on this season.

Fans instantly went there with the comments about Hannah Brown and Matt. They were putting the two together and loving it. One fan said, “y’all would make a cute couple!” And several others co-signed beneath her comment.

Some of them even tried making a couple name work for the pair, but Manna isn’t the greatest. One fan said, “if Tyler wasn’t his best friend… I can totally see the 2 of them together. They both are beautiful inside and out.”

Another poster said, “they both have the same morals and beliefs.” Some fans just like the friendship, calling them bestie goals. One fan said, “I hope you are going to check on these girls for him like your girls did for you.”

Why A Relationship Between The Two Wouldn’t Work

As TV Shows Ace reported recently, Hannah Brown and Matt may not have the same beliefs. There is a rumor that the person Hannah has been dating isn’t very religious. The unsubstantiated claim says he doesn’t believe in God. Of course, most fans think this is complete nonsense, because they truly don’t think Hannah would be with someone like that.

The main reason some fans think this wouldn’t work is because of Tyler Cameron. They are best friends and Bachelor nation knows about the complicated relationship Hannah has with Cameron. They don’t think Matt would go there with Hannah. However, there is always Anna Redman who a lot of people think is a dead ringer for Hannah.

The Bachelor airs Mondays on ABC. What do you think about a relationship between Hannah and Matt James? Do you want to see her or Tyler show up on his season? Comment below with your thoughts.

‘Y&R Spoilers : Who Kidnapped Mariah Copeland And Where Is She?
Savannah Chrisley Dedicates Instagram Post To ‘Foot Fetish Fans’
‘Love After Lockup’ Spoilers: WAIT! Doug Cheated On Rachel The Whole Time?
Fans Worry ‘Bringing Up Bates’ Will Be Canceled Like ‘Counting On’
Lauren Burnham Only Wants ‘Good Vibes’ In Dream Nursery